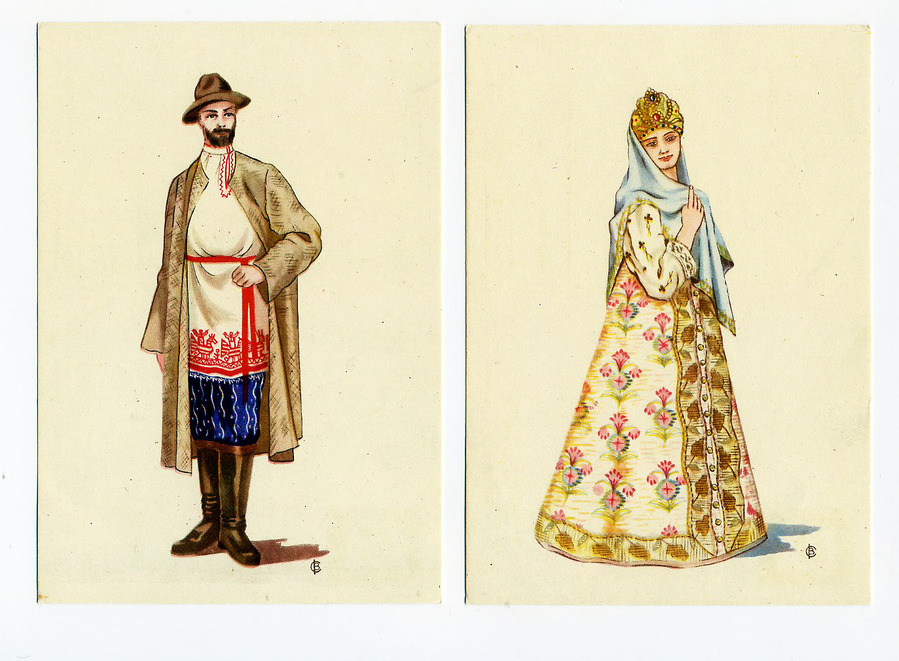 This oversized shirt was the basic element of the traditional Russian wardrobe. The lose shirt was worn by anyone, men and women as well as the rich and poor. The materials differed from basic cheap line and cotton to expensive silk. This piece of clothing was very comfortable and it was not changed at all until the 20th century. 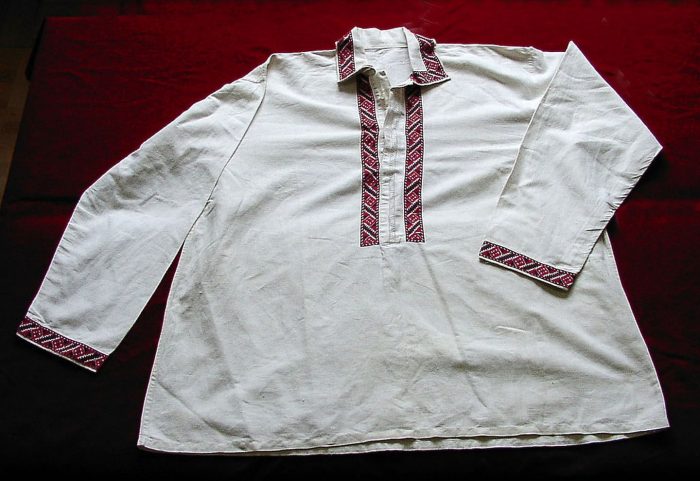 The Sarafan was first mentioned during the 14th century. First it was also used as a dress for males and only in the 17th century the term was exclusively used for a piece of women’s clothing. This multi coloured long dress with open shoulders was worn over the rubakha. It was used for every day live as well as special occasions. Sarafans were made out of different materials and included a lot of decorations. The higher social classes wore sarafans made out of silk and velvet while others were made out of domestic linen. 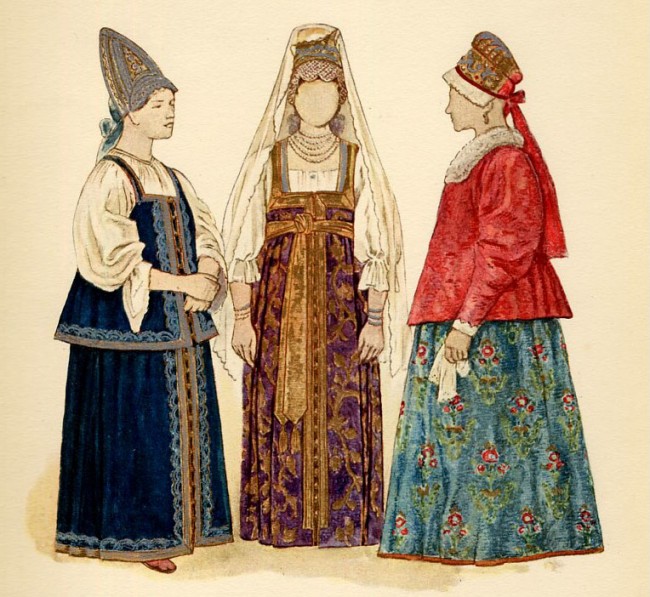 It was common for women to wear decorations for the head and hair. Depending on the civil status young women were allowed to show off their hair in a braid decorated with flowers or other things, while married women had to fully cover their hair with the so called Kokoshnik.

Married women used to put their hair into two braids and tie them around their head. Because Kokoshniks were often made out of expensive materials they were only worn a few times a year. In everyday life women therefore wore hats with a shawl tied around – the so called povoyniki. 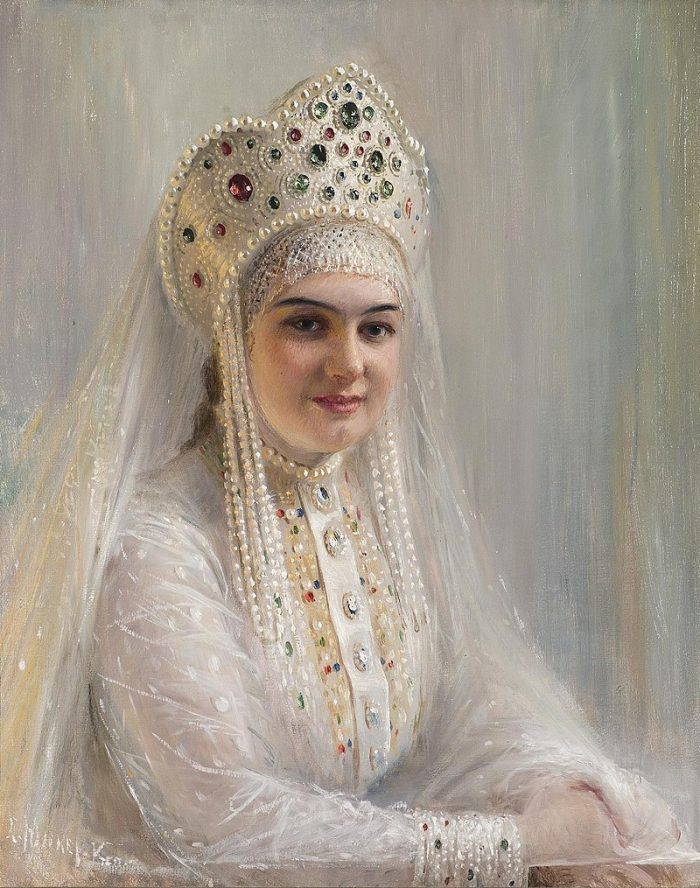 The Shuba (furcoat) has survived over the centuries and has managed to stay popular in the country. The coat was worn by women and men equally, mainly because of the harsh weather conditions. The fur used to be on the inner side while the outside was heavily decorated. Today the style of the furcoat may have changed but it still serves its main purpose – to keep warm.

The word is originally from the Middle East but this item was such an important part in the Russian wardrobe that it was seen as local. The Kaftan was a coat, quite similar to the ones today, but they were made out of expensive materials and decorated with embroidery.

Because of the size of the country, different weather conditions and raw materials there didn’t exist a single national Russian costume. The clothing differed from region to region. In the central and northern country parts the headdress was decorated with pearls while in the south it was accessorized with buttons and wool decorations. But regardless of which region one lived in the traditional clothing had a massive form and a distinct and simple silhouette.

During the 14th-18th Century

During the 14th century trade relations between Russia and Europe expanded. Countries like France and Italy exported wool, silk and velvet to the Russian capital. Clothing items featured a lot of patterns and bright colours as well as decorations like lace and artificial stones. The decorative character of the clothes was very important. Under the power of Tsar Ivan the Terrible, foreigners who wanted to enter the Kremlin were ordered to wear Russian clothing in order to show respect to the Russian throne. During the 17th century people who tried to wear clothing similar to European ones or foreign hairstyles were punished.

The traditional Russian costume was an important part of the culture and Western fashion trends couldn’t reach the country. That was until the 18th Century when Peter the Great carried reformed the look of upper and middle classes and forbid people in St. Petersburg wearing it because he thought the costume was only for peasants. Court members were from now on obliged to wear European clothing and the Long tradition of the sarafan began to crumble. From this point on European fashion began to influence the country.

Members of the tsar family were the first to change their dresses to the European style, which was very oriented towards French fashion. During this time the corset as well as the headdress, the so called fontange were brought to Russia from Europe. The fontange replaced the traditional headdress which was worn by married women to cover their hair fully. European clothing showed that someone belonged to the powerful classes while the other classes stuck with the traditional dress. The clothes worn by the common folk transformed very slowly while the change of clothing in the cities St. Petersburg and Moscow changed rapidly.

During the 19th-20th Century

During the 19th century the rococo style became very popular. Especially under the power of Elizaveta Petrovna life was oriented towards the French fashion. Women wore dresses with narrow and low shoulders and a slim waist. Oval frames and corsets were loved, high heels first appeared and skirts lost their fluff. The frenchified sarafan included the traditional headdress with folded back sleeves, a slim waist and a big train. In higher social classes the modern cocktail dress first appeared.

In the 20th century clothing became more practical. Tight corsets lost its way to looser clothes. Comfort was key and simple sarafans, shorts, blouses and ties came into fashion. Clothes for men and women had to be comfortable enough to work in and easy to put on and move around. Shoulder pads were incoporated in women’s clothing for a more masculine look and strict uniforms became part of life. There was no room for individualism and the industrial production of clothing hindered the rise of complicated cuts or decorations. At the end of the 20th century and after great changes within the Country the Russian fashion slowly began to melt with the European one. For fashion designers it was possible to open their own business, travel around the world and international brands could open their stores in Russian cities. Many Russian designers began to specialize in accessories and private individuals rather than following wih the mass production. Nowadays a lot of Russian fashion designers have made their way to the top.

Born in 1984 in Moscow Gosha Rubchinskiy first worked as a hairdresser and fashion Stylist before showing his first menswear collection in 2008. His clothes are a mix of sportswear with tailoring which helped him get a name in the streetwear scene and he often references to Russia through the colours of the flag or Cyrillic writing on his clothes.

He has become the symbol of modern Russian Fashion and many famous brands like Adidas, Fila, Reebok, Burberry or Levis have reached out to him to help them with new and fresh designs. His clothing store can be found in Moscow in the KM20 Concept store and in 2016 he was nominated as one of the 500 most influential people in the fashion world, 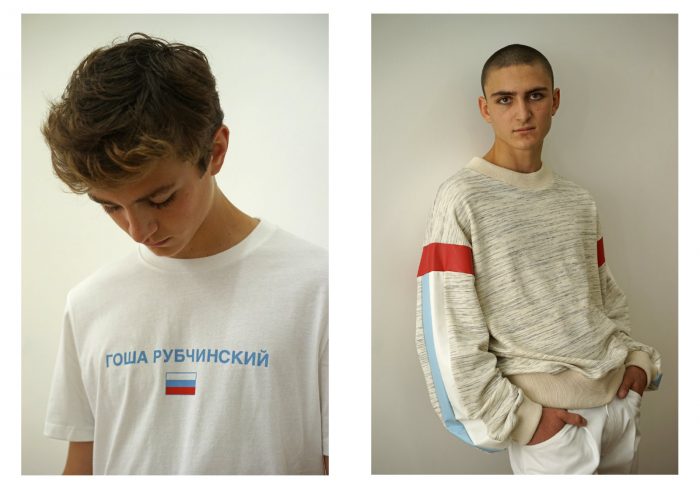 Born and raised Moscow Vika is well known in Russia and abroad for her original style, architectural cuts as well as her high-Quality fabrics. She likes to use strong lines and graphic forms and incoperates many details like appliques, crystals and artificial stones on her prints. She worked at the Fashion Magazine L’officiel Russia which helped her gain all the necessary knowledge before she showed her first collection in 2007. Her designs were featured in famous magazines like Harpers Bazaar or in the American Vogue and are sold all over the world. 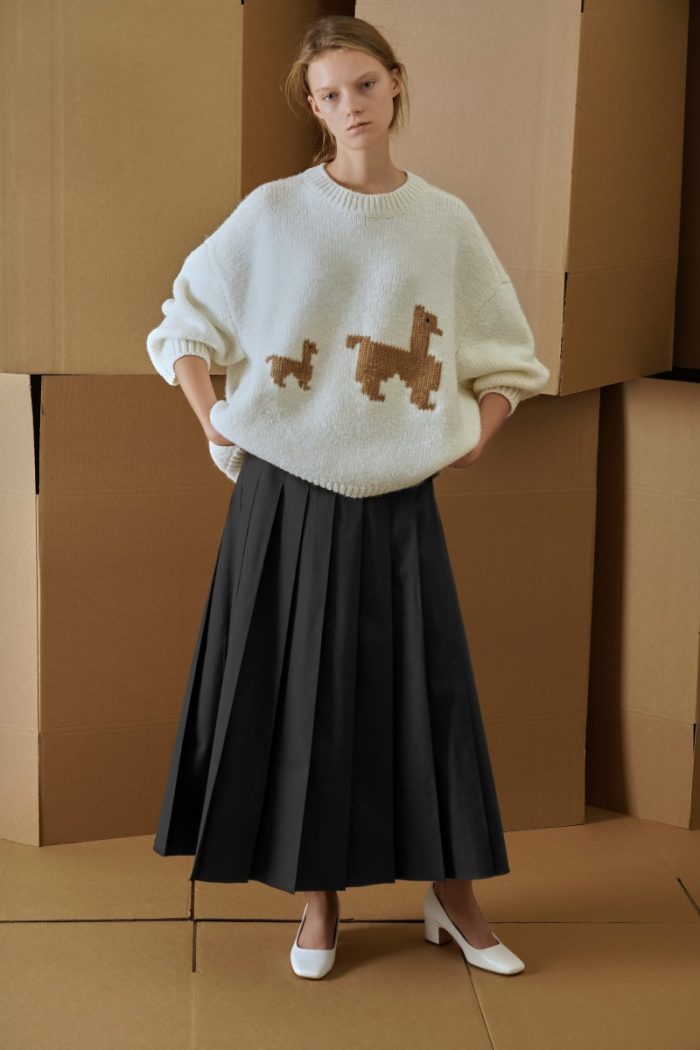 Born in 1963 he rose to fame internationally after launching his first collection in 1987 which was inspired by the famous Faberge eggs. After that he has created more than 50 collections for both women and men though the main focus is the designing of fashion for women.

He is the only Russian designer with membership in the Syndicate of High Fashion in Paris and his designs have even been exhibited in collections at the Moscow State Historical Museum, the Metropolitan Museum in New York and the Louvre Museum of Fashion in Paris to name a few.