St. Petersburg’s Metro was opened in 1955 and currently consists of 65 stations over five routes. The first line to be opened was the red line, before the blue line of St. Petersburg Metro appeared as the second one in 1961, also known as Moskovsko-Petrogradskaya. At first it ran between Tekhnologichesky Institut and Park Pobedy, but has since expanded to run from Parnas up north to Kupchino in the south.

The blue line runs straight through the heart of the center, passing some of the busiest stations, such as Nevsky Prospekt and Sennaya Ploschad. In contrast to the red line, most of the fun happens outside on the blue line. Here’s where to get off:

On weekends the flea market at Udelnaya is the ideal place to pick up some authentic souvenirs. Follow the stream of people from the metro station, across some railtracks, and walk past the stalls selling second-hand sportswear. After a ten minute walk, you will see items ranging from daggers and throwing knives to pins and stamps from the Soviet era. Old newspapers, books and children’s toys, as well as cameras and turntables are among some of the items I saw people carry back to their cars or metro last time I visited. Note down some useful Russian phrases and start bargaining.

I’ve tried bus, marshrutka and taxi, but there’s only one efficient way of getting to Petrogradskaya, and it’s the metro. The island is one of the best places to get lost in St. Petersburg, with its interesting architecture and many cafes. From Petrogradskaya you can easily access Peter and Paul Fortress, see the Aurora cruiser known from the 1918 revolution or visit the botanical garden. Make sure to stop by! 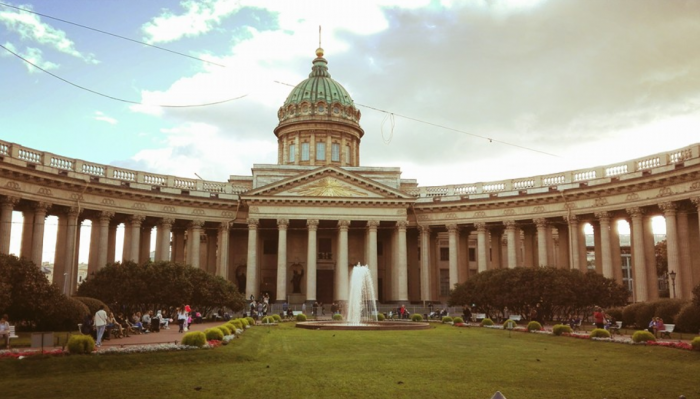 You haven’t been to St. Petersburg before you’ve visited Nevsky Prospekt. In short walking distance from the station, you have the Church of the Savior on the Spilled Blood, the Kazan Cathedral, the art nouveau style House of Books, the Mikhailovsky Theatre and the Russian museum. Puhh…. Moreover, it’s just a ten minute walk from Liden & Denz, the ideal place to  improve your Russian before you visit all of these attractions.

Kupchino marks the southernmost station of the St. Petersburg Metro Blue Line and does have a somewhat scrappy reputation. It’s usually one of those areas locals would advise you to stay away from, without actually having been there themselves. Most foreigners who come are likely to be on their way to Petergof, but don’t let that stop you. Take a stroll around the ‘ghetto in the south’ and see for yourself.

Do you have some suggestion along the St. Petersburg Metro Blue Line we forgot to add? Let us know in the comments section below!