Observations Of The Moscow Metro 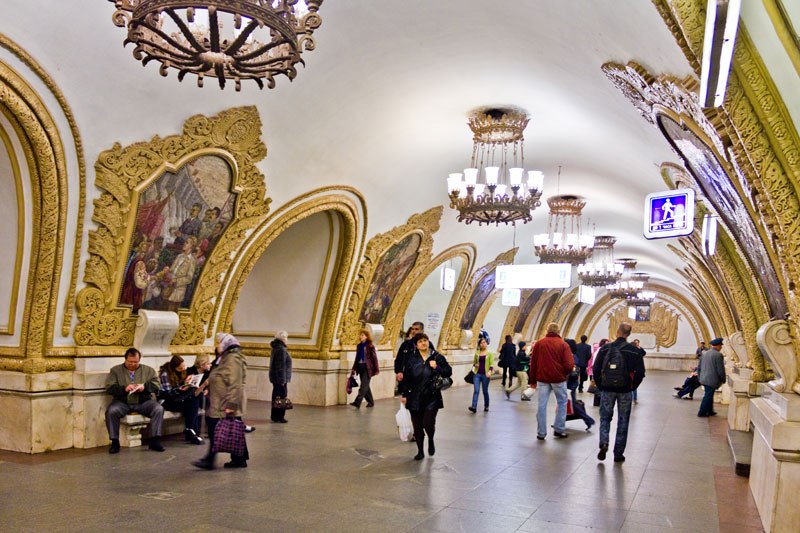 Since the beginning of the month, I’ve been commuting via the Metro (Метро) on a daily basis during my stay in the wonderful city of Moscow. It would be fair to say that I have many observations. Like most underground railways, there are some general rules of etiquette that should be adhered to, and so let me try to and explain what I’ve discovered so far and allow me to indulge in introducing some common Metro terms that I have endeavoured to try and translate into Russian. Hopefully there can be some translative value to your reading of this blog entry!

One of the first things I noticed was the heat. Maybe it’s just the time of year/unusual heatwave, but the metro trains here (поезда) really are sweltering hot. I advise you to come wearing appropriate clothing in expectation of such heat. I saw one guy who decided to take half his clothes off and had them strewn over other seats. Please, don’t be this person!

Also, it never ceases to amuse when I see people practically on their tip-toes in anticipation of the metro doors opening. Their obvious reason being that they want to grab a seat before others. The race is on!

No matter how much you try, you (like I) wont look suave or elegant when making a dash through the closing metro doors (“Осторожно, двери закрываются!”). You’ll probably look like a diddy. Just sayin’.

Please, don’t be that person who reads someone else’s phone, notebook, newspaper etc from over their shoulder. It’s a cardinal sin! We all have phones these days don’t we? So use your own. Yeah and on that note, please don’t hold your phone or book at arm’s length, it’s the work of the devil. Space is limited folks.

As eluded to in Nicks blog entry, the Russian smile is something of a mystery. And on the metro they can be even more elusive. Most people seem to have their game face on. Check out his blog about Russian smiles here – https://www.russiancourses.com/blog/mystery-of-the-russian-smile/

⦁ Dinamo station used to contain a physics laboratory. The reason being that were certain experiments that were needed to be carried out prior to WWII. 60m underground was deemed sufficient to lose the cosmic rays produced during experimentation.

⦁ There used to be a secret anti-nuclear bunker within Taganskaya station. It’s fair to say that it’s no secret now as there’s a museum housed inside it. It’s pretty cool (although hot if you get my drift) and so I urge you to satisfy your “geek” needs and check it out.

⦁ Performance and arrival times of each metro train achieves 99.992% accuracy. That’s what you call punctual.

⦁ There are currently 76 bronze statues depicting Soviet heroes on the platform (платформа) of Revolution Square station. One you might be interested in checking out is “The border guard with a dog” as local myth says that you’ll have good luck with exams if you rub the nose of the dog. It comes as no surprise to know that the dogs nose is said to be very shinny!

One last thing I must touch on is the beauty of some of the stations (станции). Sadly, many people are so busy getting from A to B that they take it all for granted and forget to look at and truly appreciate their surroundings. The only true way to experience this, and all that the Moscow Metro has to offer, is to be here and to see it with your own eyes. So, what are you waiting for?