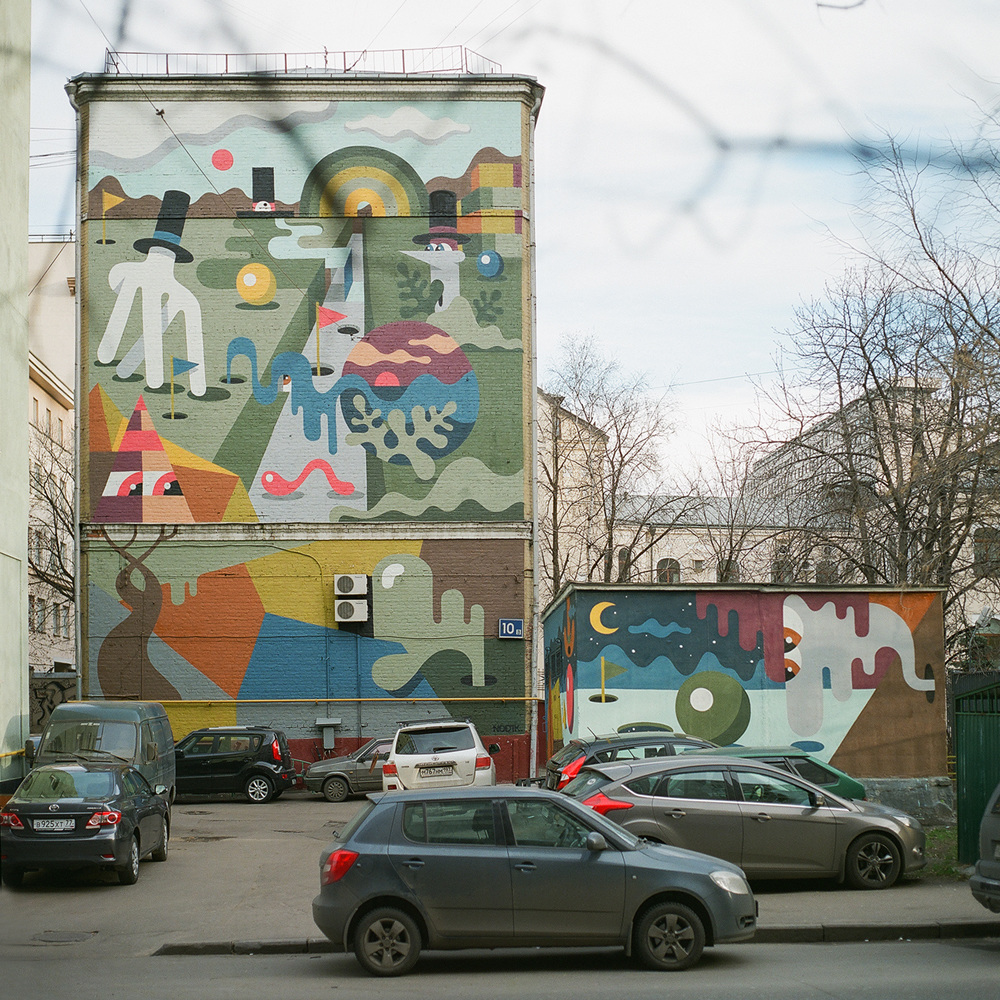 The avant-garde community continues to shape the landscape of modern Moscow. An eclectic mix of Muscovite street art can be found throughout the city. Street art has seen a surge in popularity over recent years and is seen by many as uncensored personal expression in its most raw and enigmatic form.

The origins of Moscow street art dates back to the late 1990s. At that time many frowned upon the movement and viewed it as nothing more than mindless vandalism mixed with desecration. As a consequence street art was pushed to the underground scene until when in 2013, the Moscow Government approved the LGZ festival, curated by art association Artmossphere. The name of LGZ is an acronym for “luchshiy gorod zemli” or in Russian “Лучший город Земли” which translates to “the best city in the world”. This was a watershed moment for Moscow’s street art and subsequently allowed local artists to thrive on a domestic and international front. 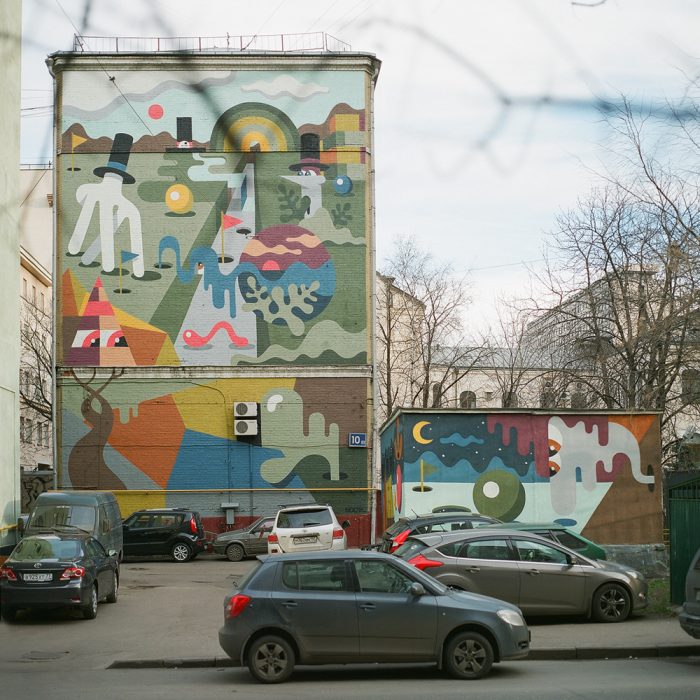 A mural in Gilyarovskogo Street, as part of the 2013 LGZ Festival

Moscow Street Artists You Should Know About –

Often seen as one of the 90’S pioneers, Zmogk was one of the first artists to paint his work on to the walls of the Russian capital. Infact, he’s still active to this day. His work can be described as abstract, with robotic and futuristic influences coupled with vibrant colour selection and dramatic compositions. 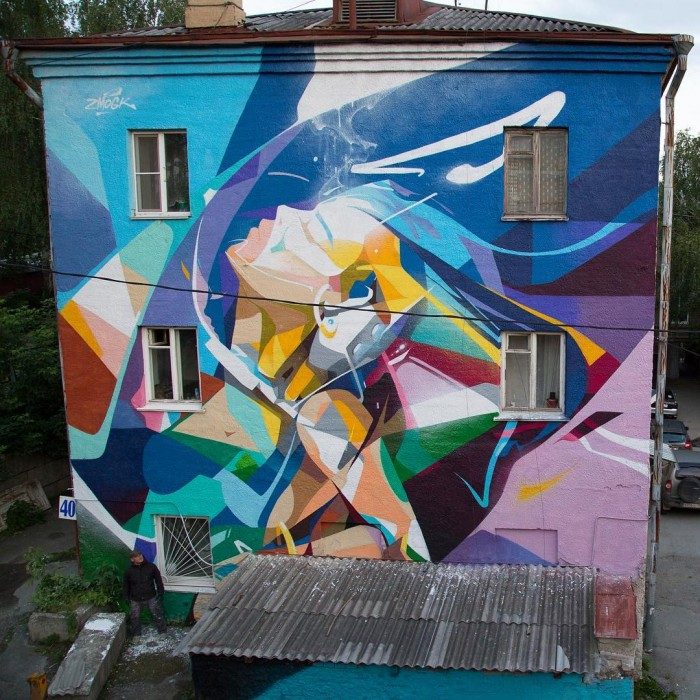 Alexey Luka, colloquially known as Luka, is a highly respected contemporary street artist known for producing works of an abstract nature fused with organic shapes and geometric compositions. Oftentimes he travels internationally decorating the vacant walls of many of the world’s bustling metropolises. Furthermore, he is often involved in the curation of several art exhibitions with the intention of show-piecing street art to a wider audience. 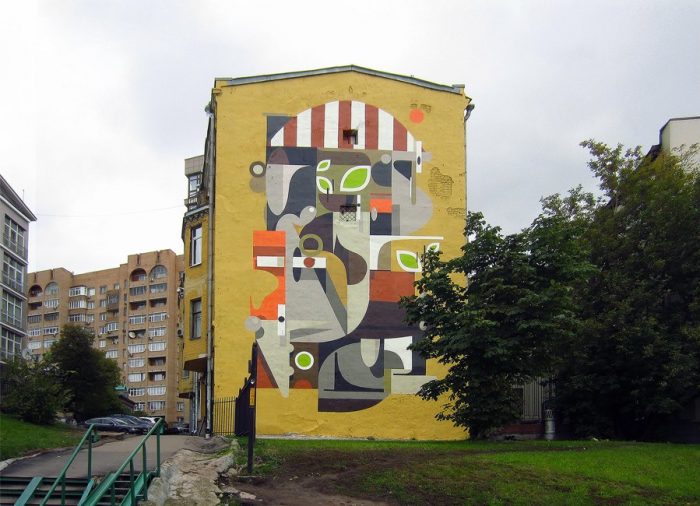 Iney, meaning frost in Russian (Иней) has gained a reputation as one of the most respected street artists in the city. Dotted throughout Moscow, her work depicts an array of female cartoon characters. She additionally hosts her own exhibitions and has been at the forefront of Russian contemporary art festivals.

Moscow attracts international participation in its street art, as well as attracting the best Russian street artists from outside the city.

Hailing from Brazil, renowned artist Eduardo Kobra recently had his work commissioned by local authorities. Depicted in his piece is Russian legend and ballerina, Maya Plisetskaya. Head to Bolshaya Dmitrovka street to view this piece in all it’s splendour. 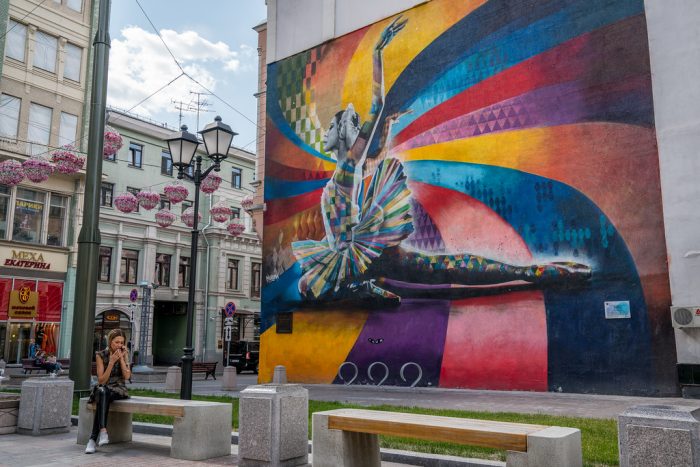 Australian Fintan Magee painted “The Messenger” on behalf of the Most Street Art Festival and his signatory imagery can be witnessed by locals and tourists alike. As you can see, the young woman depicted in the mural has left a message in a bottle. Perhaps it signifies her hope that somebody will pick it up and read it? What do you think? The painting can be viewed near to Trubnaya metro station, at Rozhdestvenka 23/5.

Kazan native Rustam Salemgaraev created “The Unhurried Journey” as a result of his participation in a recent LGZ Festival. It’s clear to see that he has a surrealist style and often touches of themes of knowledge, community, environment and education. We can see these influences in the striking and massive piece adorned and taking centre stage of the wall. It can be said that we are taken on an underwater journey of a pied piper sat on top of fish, surrounded by floating islands. 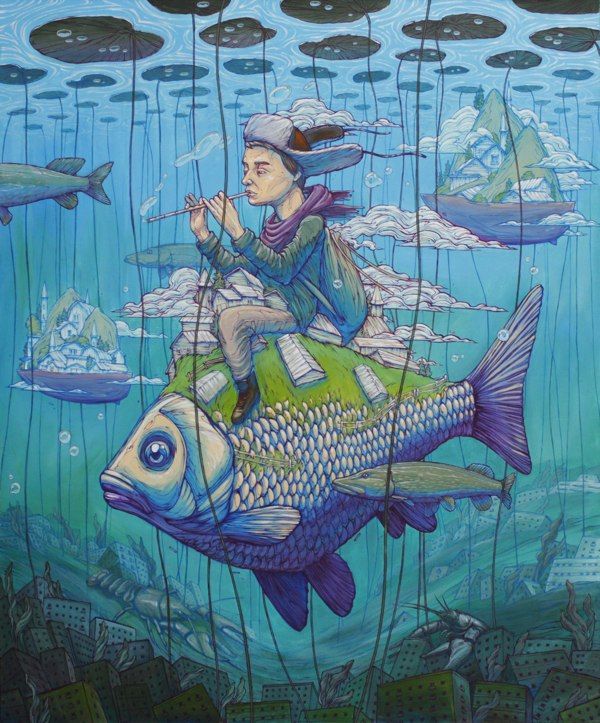 From little seeds grow mighty trees, and street art in Moscow as we know it today owns a debt of gratitude to the pioneers of the 1990’S. Since those days the movement has continued to evolve to the point of where it is today. For the adventurous, I suggest getting your boots dirty and to get out there and view as many artworks in the city as you can. A handy map of current street artworks and their location can be found here.