To Siberia in T-shirts – Tages-Anzeiger 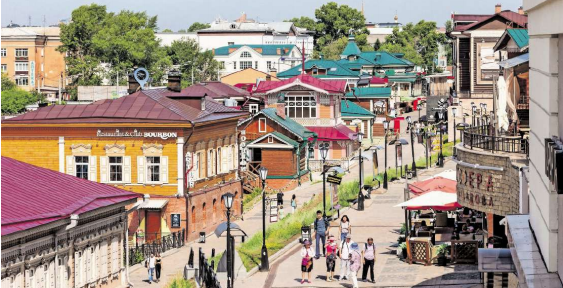 Siberia – Russia’s infamously cold region, with frosts up to -40 degrees in the winter, withdrawn inhabitants, endless forests and steppes. These things usually come to mind when we hear this name. But is it really so gloomy up there? Not according to Felix Baumann, campus director  of Liden & Denz Irkutsk, who recently welcomed a group of journalists on the Siberian leg of Liden & Denz press tour. An extract from Peter M. Birrer’s article In T-shirt und Shorts nach Sibierien (To Siberia in T-shirts and shorts) from the Tages-Anzeiger.

Read the article in German

One would expect people struggling through the icy wind in big coats on the streets of Irkutsk, Siberia. It is almost impossible to imagine anything similar when the sun shines brightly and there’s a heatwave of +30 degrees Celsius, Felix is wearing shorts and a loose T-shirt. Felix is no tourist here: he has built himself a life in Irkutsk as the campus director of Liden & Denz Irkutsk, which opened its gates in 2017. But how does one end up in Irkutsk? The historical city lies 4200 to the East from Moscow – it takes a five-hour flight or a 72-hour train ride from the Russian capital to get here. Luckily, Irkutsk is accessible by the Trans-Siberian Railroad, which connects Moscow and Vladivostok in the East.

It is not Felix’s first time in the city, located along the Angara river – he completed an internship, then went on teaching French at the university until 2007. ‘I would love to stay for ten years’, he says. Contrary to the picture most of us share about Siberia, life is not as dark and cold as we imagine it: according to weather data, the Sun shines more than 200 days out of the year. Olga K., a resident of Irkutsk, who studied in Germany and Austria, now working as a tourist guide, would also like to debunk some other stereotypes of Russians: ‘The cliché of withdrawn, closed-minded Russians doesn’t even come close to reality. In fact, we are very open, kind and hospital. But we are different from Moscovites. We aren’t that snooty.’’ Bogdan, a university student confirms this local spirit by stating: ‘We are Siberians. Proud Siberians.’

Even though Russia is hosting the FIFA World Cup this year, Irkutsk won’t be seeing much of it: all of the events are taking place in the western part of the country. But summer cannot be boring in Siberia, the region has a lot to offer even without football: the breathtakingly beautiful lake Baikal and the Angara river are truly nature’s exceptional wonders.