Home » Blog » 9 Soviet Cartoons to Improve Your Russian With

9 Soviet Cartoons to Improve Your Russian With

We’ve already written about how watching cartoons can be a great way to improve your Russian. The fact they’re meant for children means the language isn’t too challenging, making them a fantastic way to expand your vocabulary and improve your comprehension skills while learning about Russian culture.

In this post, we’re going to look at Soviet cartoons in particular. Animation really took off in Russia during the Soviet era, when it was almost entirely produced by the state-sponsored Soyuzmultfilm studio. Many classic Soviet cartoons continue to be admired to this day – some because they are cute, colourful and kitsch, and others for their dark humour and melancholic beauty.

Many of these animations are just 10 to 20 minutes long and freely available (often with English subtitles) on YouTube, making them perfect for bite-sized bit of language practice. So, without further ado, here are nine Soviet cartoons that are well worth watching.

This 20-minute musical cartoon is worth watching for the fantastic opening sequence alone, which involves a donkey version of the trololo man. This colourful animation is based on a Brothers Grimm fairy tale, and follows a troubadour and his motley crew of animals as they travel to perform a show for this King and his subjects. The movie quickly gained cult status thanks to its catchy, rock’n’roll-influenced soundtrack. 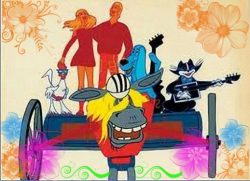 This is Winnie-the-Pooh, but not as you know it. Instead, A. A. Milne’s source material is given a typically Russian interpretation. The delivery is deadpan and ironic, Pooh is prone to philosophical self-reflection, and Christopher Robin is no longer in the picture. This 20-minute short was the first in a trilogy and was followed by Винни-Пух идёт в гости (Winnie-the-Pooh Pays a Visit) in 1971 and Винни-Пух и день забот (Winnie-the-Pooh and a Busy Day) in 1972. 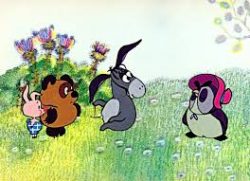 Cheruraska is an iconic character, not only in the former Soviet Union but all around the world (he’s particularly popular in Japan, where he slots right into “kawaii” culture). He was the star of four stop-motion animated shorts from 1969 to 1983 alongside his friend Gena the Crocodile. With his monkey-like ears and bear-like body, he’s “an animal unknown to science” – but very adorable with it. 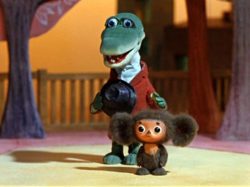 If you’re only going to watch one Soviet cartoon in your life, I encourage you to choose this one. Despite being just 10 minutes long, it’s won multiple awards and is repeatedly voted among of the world’s greatest animated films. On the surface, the story is a simple one: a small hedgehog gets lost in the fog while on his way to stargaze with his friend, the bear cub. But, being Russian, it’s of course a lot more evocative and existential than that.

If some of these cartoons seems a little dark for your taste, seek comfort with A Kitten Named Woof. This adorable hand-drawn animated series is straight-up adorable, following the adventures of an unusually named kitten and his puppy best friend. Fun fact: dogs say “gav” instead of “woof” in Russia. Who knew? This 10-minute military sci-fi film is seriously weird. Yes, there’s the plot, which revolves around the deployment of an automated mind-reading tank in the not-too-distant future. But weirder still is the animation technique, photographica, a pre-CGI attempt to give the film a three-dimensional quality. Perhaps it was impressive at the time… but today it just looks pretty darn creepy.

At 45 minutes, this is the longest animation on this list – but if you like ‘80s sci-fi, then you’re going to love this movie, which is now considered a cult classic in the Russian-speaking world. The film is set in a high-tech communist future and is essentially a detective story in space involving a 10-year-old heroine, space pirates, aliens and robots. What’s not to like? 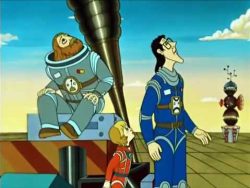 This delightful 10-minute short is based on a Ukrainian folk tale and has won several awards. The story follows an old watchdog and an ageing wolf who become friends and team up to help each other out. The story is sweet and funny, the animation is charming and colourful, and the soundtrack features a number of atmospheric Ukrainian folk songs. 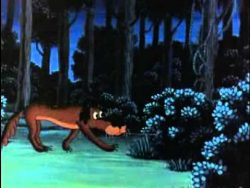 So there you have it: nine Soviet cartoons that are great to watch AND will help improve your Russian language skills. Let us know what you think of them – or share your own recommendations – in the comments below or on Facebook. We’d love to hear what you think.