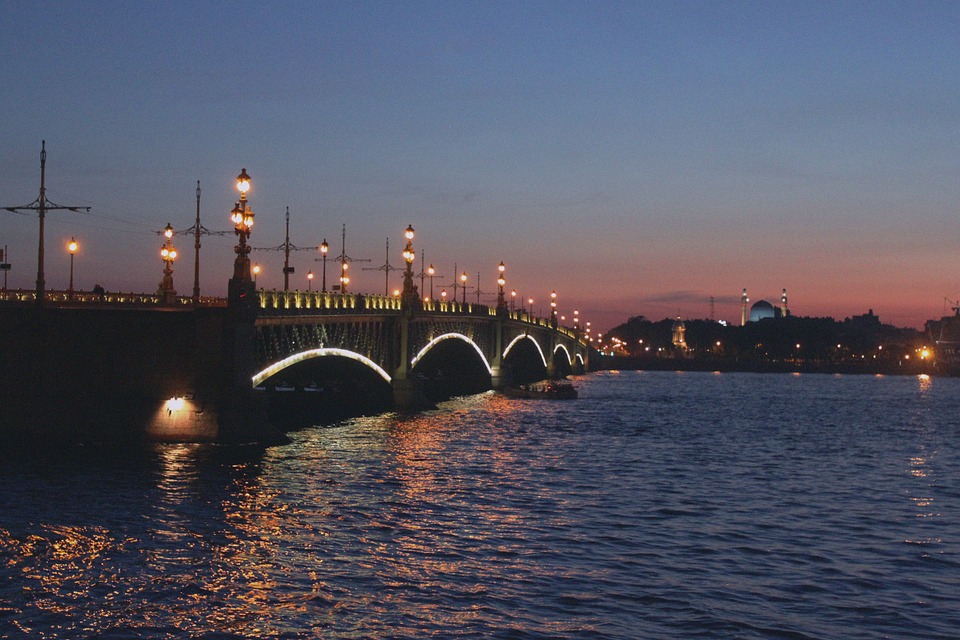 It is very rare to have a metropolis build on such a territory as St. Petersburg. The city is famed for its beautiful channels and islands, and the bridges of St. Petersburg are world-famous. Read why below.

Why islands, why bridges? A brief history

It’s not too often nowadays that you see large cities spread over several islands. But in 1703, when Peter the Great decided to build the city of St. Petersburg, he was more focused on building a city with a great sea port rather than finding a good piece of land to work with. The location he chose to build St. Petersburg on was marshy and split across many different islands – not ideal for building Russia’s new great capital, right? But Peter insisted, and St. Petersburg’s first building, Петропавловский Крепост (Peter and Paul Fortress) was built on Zayachy island. Whilst building the city, the number of islands greatly decreased as river channels were filled up and built upon, and today it’s generally agreed that St Petersburg is made up of 33 islands and the Kronstadt archipelago (though some argue that up to 42 different islands make up the city). The islands cover about 80km squared: 6% of the city, and around 70,000 people live on them. Of all the city’s islands, the ones you’re most likely to visit are:

Today, there are over three hundred bridges connecting the city. Because of this, St Petersburg has its own unique tourist attraction: bridge spotting.  The city’s bridges are both beautiful and ornate, making the bridges an attraction in themselves. In my opinion, bridges worth a visit include:

Anichkov bridge is located on Nevsky Prospekt, St Petersburg’s main street, and crosses the Fontanka. Its most recogniseable features are its four rearing horses and their tamers, 2 at each end of the bridge. It was built in 1841, and the horses and tamers were added between 1849 and 1850. Legend has it that the architect, Klodt von Urgensburg, depicted his enemy’s face under one of the horse’s tails – so if you visit it, watch out for tourists sneaking a peek at each horse’s underbelly! 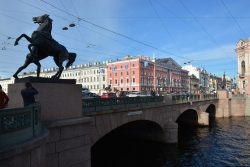 Located next to Isakievskaya Ploshad, right next to Иссакиевский Собор (St Isaac’s Cathedral), you may have already walked across the Blue bridge and not even realised. It claims, however, to be the widest bridge in the world, at almost 100 metres wide. There are usually a number cars parked there, but if you take a close look you’ll see that you’re actually walking over a bridge!

When talking about St Petersburg bridges, it’s impossible not to mention Palace bridge. You’ll find Palace bridge featured somewhere on almost all St Petersburg souvenirs and tourist merchandise! As such an emblem of the city, it’s hard to imagine that the bridge was only built in 1912, and opened to public traffic in 1916! The views of the city from this bridge are breathtaking and especially at New Year’s, the bridge itself becomes a main attraction, covered in hundreds of beautiful fairy lights.

The opening of the bridges

In the months between April and November St Petersburg is divided each evening, as 13 of the city’s bridges are raised to let commercial ships through. In the winter period, the river is usually frozen over completely or too icy to let ships through, so the bridges stay down.

Making sure you’re on the right side of the bridge to get home is a fine art, carefully honed by the Petersburg island dwellers, who have the расписание расводов (bridge opening schedule) firmly ingrained in their minds. So if you don’t live on the central island, watch out! For those of us Petersburg newbies, here’s the timetable.

The opening of the bridges can also be considered a sightseeing attraction in its own right, especially in the white nights period around June and July. You’ll often see groups of Russians and tourists alike on the river bank late at night to watch the opening of palace bridge – it really is a magical and majestic sight, I highly reccommend paying a visit!

I'm Alana, an intern at Liden & Denz St Petersburg, spending the summer in Russia's fantastic northern capital. Follow me on my adventures around the city!