Most Popular Questions About Russian Language 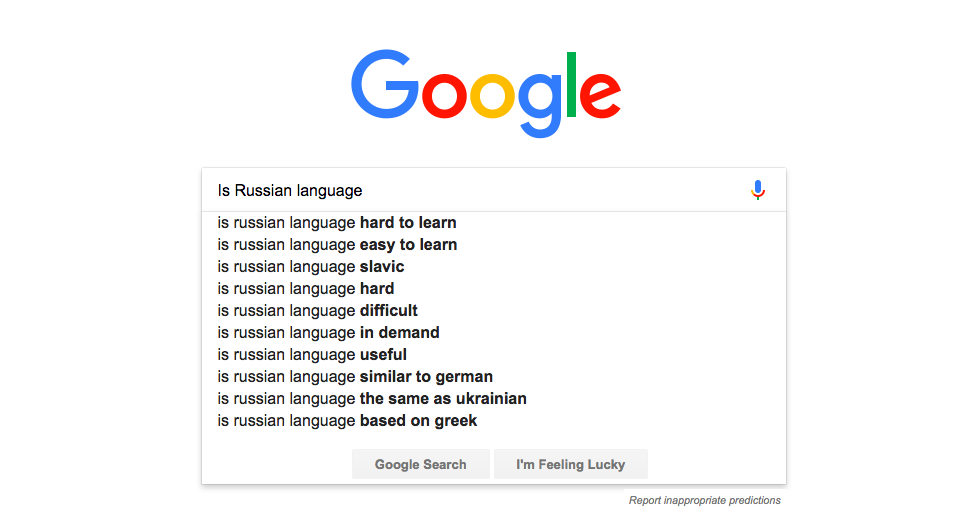 People turn to Google with queries about all sorts of things – including Russian language. Here, we answer some of the search engine’s most common questions about the language. We hope it helps!

Q: Is Russian a language?

Let’s start with the basics: yes, Russian is a language. A language spoken by roughly 166 million native speakers to be exact, making it one of the world’s top ten most spoken languages.

Q: Is Russian a Romance language?

Q: Is Russian a Germanic language?

Still not it. One more try.

Q: Is Russian a Slavic language?

Originally, no – as a Slavic language, Russian has Slavic roots. That said, over the centuries Russian language has been significantly influenced by Western and Central European languages, many of which have Latin roots. This means that today, a lot of Russian words sound very similar to the English, German or French. So for example, the Russian word for “café” is “кафе́”, “opera” is “о́пера”, and “bar” is “бар”. Easy!

Q: Does the Russian language have an alphabet?

Yes – it has 33 letters and is written using the Cyrillic script. Some of the letters are the same as English, some look a little bit different, and a few are completely new. However, don’t let it put you off – it really doesn’t take that long to learn the alphabet, we promise. Plus, once you’ve got the hang of it then reading Russian is pretty easy because almost everything is spelled phonetically.

Q: Is Russian hard to learn?

How long is a piece of string? How hard you find Russian will depend on a wide range of factors, from your native language to the resources you use. Of course, it’s true Russian has a reputation for being difficult. The USA’s Foreign Service Institute classifies it as a Category IV language, which means it should take an English speaker around 1,100 hours to master – roughly twice as long as it would take to learn another Western European language. That said, the alphabet is actually very easy to learn, the pronunciation is fairly straightforward, and there are plenty of cognate words that make the vocabulary less daunting. So it’s probably not as hard as you think!

Q: Why is Russian so hard?

OK, we’ll admit there are some aspects of the language that a lot of foreign learners find challenging. The alphabet can prove an initial stumbling block, with some letters and sounds being trickier than others. Certain elements of the grammar also generally take a while to master – there are six different cases and the verbs can be confusing at first. Still, this doesn’t stop millions of people from learning the language every year. And if Russian children can do it, so can you!

Q: Where is Russian spoken?

Unsurprisingly, Russian is spoken in Russia, where it is the national language. It’s also widely spoken in countries that belonged to the former Soviet Union, including Armenia, Azerbaijan, Belorussia, Estonia, Georgia, Kazakhstan, Kyrgyzstan, Latvia, Lithuania, Moldova, Tajikistan, Turkmenistan, Uzbekistan and Ukraine. And of course, there are Russian speakers living all over the world – around 30 million Russian native speakers live outside of Russia, with large communities in the USA, Germany, Israel and beyond.

Exactly how useful Russian will be depends on where you are and what you intend to do with the language. That said, there are a lot of reasons why it seems fair to consider Russian a useful language. It’s one of the world’s major languages, spoken by millions of people globally. If you want to spend time in Russia and really get to know the culture and locals, then speaking Russian is a must. And Russian is a highly employable language in terms of improving your job prospects. It’s not only astronauts who need to learn Russian – there’s rising demand for Russian speakers globally and low competition.

Of course, a language doesn’t have to be “useful” in order for you to learn it – if you want to learn Russian purely because you find it beautiful, there’s nothing wrong with that! And Russian is a beautiful language. While a lot of people think it sounds harsh, this is usually because they’ve only heard the language spoken by villains in James Bond films. But go listen to some Russian poetry and you’ll quickly see how wrong those stereotypes are.

So there you have it: answers to some of the most frequently asked questions about Russian, according to Google. We hope you’ve found this helpful. If you want to find out more about the language, please browse our blog posts on learning Russian. And don’t forget to follow us on Facebook to keep up to date with our latest content.