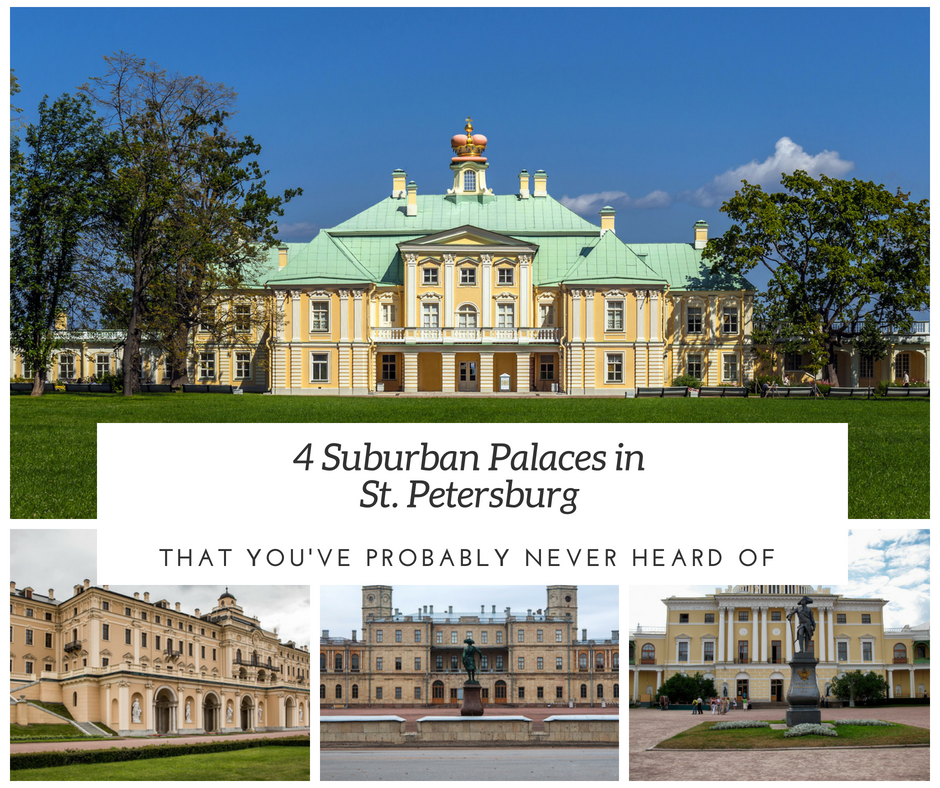 I’m sure you’ve all heard of Peterhof and Catherine’s Palace (aka Tsarskoe Selo), but do you know about St. Petersburg’s suburban palaces that the tourists don’t go to? Escape the hustle and bustle of the city, breathe in the fresh country air, have a picnic and experience another beautiful Russian palace and park with no long lines and crowds! 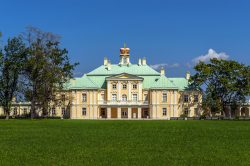 It may surprise you to find out that this was the first palace built in the suburbs. That’s right – even before Peterhof, there was Oranienbaum! In 1707,

Peter the Great gave this seaside territory to his best friend, right-hand man and partner in crime, Menshikov. While Peter didn’t have a flare for the luxurious, Menshikov did! His place was usually the place to be.

This palace has passed through many hands so to speak. After Peter’s death, Menshikov was exiled and the palace was eventually passed on to Peter III, who was killed in a coup d’etat. Then Catherine the Great made this one of her countryside homes. Two of the city’s best architects, Rastrelli and Rinaldi, have worked on the palace and made it breathtakingly beautiful.

This is one of the few original palaces that wasn’t destroyed by the Germans.

The easiest way to get there is by train from the Baltiysky Railway station to the Oranienbaum station.

Peter planned to make this his summer house residen

ce when en-route to Kronstadt which he visited frequently at the time. Strelna was to be his ‘Versailles’. He hired Jean Baptiste Le Blond, who had previously worked alongside the lead landscape architect of Versailles (Andre Le Notre), to design and build it his fountain paradise. Plans for the fountains went under water. The foundation wasn’t strong enough to handle the fountains, so Strelna was abandoned and Peter moved on to building his beloved Peterhof.

Peter’s palace there was preserved. Even the Nazis preserved it. The territory passed on to Grand Duke Konstantine Pavlovich and it remained in his line until the revolution in 1917. During WWII, Strelna was used as a naval base. The Germans destroyed Konstantine’s palace after they evacuated and only the walls were left standing.

In 2001, Strelna restoration began and Putin now uses it as a presidential residence when he’s in town. Several rooms of the palace are dedicated to the former Grand Duke, Konstantin Romanov. 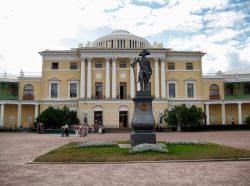 In the 18th c, Catherine gave Paul I a big chunk of land to build a palace on, 4km away from her Tsarskoe Selo. She even loaned him her architect. Wanting nothing that resembled his mother’s palace, Paul and the architect butted heads and parted ways. He hired another architect to finish out the project.

When Paul died, his wife turned the house into a memorial to him and she lived there until her death. She passed the house along with one condition, the furniture had to stay there. As the palace passed on to the soviet government, Maria’s wish was safe guarded and the furniture was preserved. During WWII, it was packed up and shipped out before the Germans arrived.They took whatever treasures they could find and left Pavlovsk in ashes. The Soviets started to repair it as soon as the war was over.

Go from the newly remodled Vitebsky Railway Station near Pushkinskaya to the Pavlovsk station. 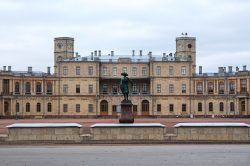 Catherine had this palace built for her boyfriend at the time, Grigory Orlov. It was a gift to him for his role in overthrowing the emperor, her former husband.

In 1766, she purchased the manor from a noble and brought on one of her favorite architects, Antonio Rinaldi, to give the manor a massive upgrade.

After Orlov’s death, she bought it back from his relatives and presented it to her son (Paul). By that time, she’d already given him Pavlovsk and he was investing his time and money into building a palace there, so he decided to build up the surrounding area near Gatchina and create a town around the palace. When Catherine died, Paul gave Gatchina the status of Imperial City.

It later became a safe haven for Alexander III and his family after the brutal murder of his father. Advisors thought they’d be safer here. During WWII, it was also occupied by the Germans and left burning when they retreated. Now it’s back to its status as palace/museum and you can visit it and the beautiful park nearby.

It’s a straight shot from the Baltiysky railway station to the Gatchina station.

Keep reading about more of St. Petersburg’s suburban palaces and getaways for the weekend here and follow our blog for more insight on life in Russia.

Stacey Watson is an American expat who loves uncovering fascinating tidbits of Russian history and discovering new things to do in St. Petersburg.