Surprising and Unusual Places in Moscow

It is clear to everybody that living in the capital city of Russia is never boring. There is always something interesting to do and many tourist guides give tons of nice ideas about where you can hang out. Moscow is rich in history and art and everyone can admire them thanks to the countless museums, squares and buildings. Otherwise, people who prefer to relax and enjoy the pleasant summer weather can just spend their free time in Moscow’s wonderful parks and gardens that bring some sparkle to the city. But if you are tired of the ordinary experiences that the city offers and you are ready to discover surprising and unusual places, this post will make your day!

Moscow offers many panoramic viewpoints, where you can admire the city from a different and wonderful perspective. Among the most famous ones you can find Sparrow Hills and Ivan the Great’s Bell Tower, but what I think is the most original place is definitely the Ostankino TV Tower. This telecommunications tower was inaugurated in 1967 for the 50th anniversary of the October Revolution. It is 540 metres high and until 1976 was the tallest building in the world (now it is the eighth one). The tower is located in the Ostankino district, in the north of the city, and lately its observation platforms have attracted many tourists. The tower offers two kinds of visits: the first platform is covered by glass and is 337 metres high, whereas the second and new one is only 85 metres high but has no glass around it. You can also take pictures on a crystal base, where it seems to be suspended within the void. Of course, I recommend this place only to those people who are not afraid of heights, but remember to book your visit in advance. Later, you can also reward yourself for being brave and have something to eat or drink at the restaurant “7th Heaven” inside the tower, whose floors rotate 360° for 40 minutes.

With this bizarre appellative Muscovites refer to the building of RAN, the Russian Academy of Sciences (Российская Академия Наук), which also houses a conservatory, a concert hall and a restaurant. 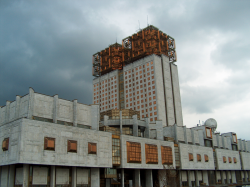 It is a twenty two-storey building complex consisting of two square towers characterised by a metal décor on the roof, which resemble two big brains. This building complex was built during the Soviet era as a symbol of the state investment in science. Today it is the subject of local legends: for example, a former staff member said that people started experiencing unexplained headaches after its construction or other conspiracy theories suggest that the metal rooftops were a state instrument for transmitting signals and controlling local people’s minds. If you want to have a look at it, just go to Leninsky Prospekt, 32a and you will be impressed by this unusual structure…and risk to get your mind controlled! 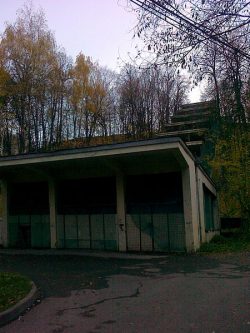 The Moscow Metro is known all over the world for its beautiful metro stations, which remind us of elegant hotel halls or museums. Among tourists, it is now common to attend a tour of the most beautiful and decorated metro stations in the city, considered like a trip towards the Soviet past. What I want to suggest here is another step to get closer to the metro and Moscow’s past: a visit to an abandoned escalator gallery located at the base of Sparrow Hills. During Soviet times, Muscovites arriving at the metro station “Leninskie Gory” (today “Vorobyovy Gory”) could reach the top of the hill in Kosygin Street just taking an escalator that was 90 metres high. This Gallery became famous because it appeared in the Soviet film Oh, That Nastya! (Ох уж эта Настя!) and in the Italian Sunflowers, starring Sophia Loren, who rides the escalator herself! The Gallery and the station were closed in 1983 and nowadays all that remains are the ruins of the gallery’s cement structure covered in graffiti that often attracts visitors.

This bridge, officially called Tretyakovsky Most, close to the Repinsky skver gardens and Bolotnaya Ploshchad, shows signs of a popular craze that has also reached many other cities in the world. It consists of padlocks that young couples secure to bridges after having engraved or written their names on them. Then they toss the key into the river below, where it will remain forever, strong a 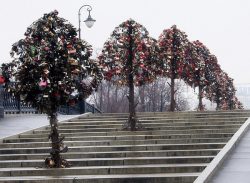 s people’s feelings. In some places, this activity is considered vandalism and a damage to the landscape, but here in Moscow it is even encouraged. On Luzhkov Bridge you can find a forest of metal trees made of coloured padlocks of different shapes and sizes, where new ones are usually added on wedding days. It seems to be the perfect place if you are a true romantic and want to have a lovely walk with your partner. Otherwise, if you do not like lovey-dovey atmospheres, just take advantage of the nice view of the canal, churches and ancient buildings. The Tretyakov Gallery is also only a short distance away!

After visiting these places, your experience in Moscow will be complete and even more exciting. And if you are also planning to go to Saint Petersburg, why don’t you have a look at its weird and wonderful places?

I'm Francesca, an Italian 23-year-old student of Russian at Liden&Denz. I am also an intern as editorial assistant for the school blog, writing about the Russian culture and living in the capital...I hope you will be interested in my articles!