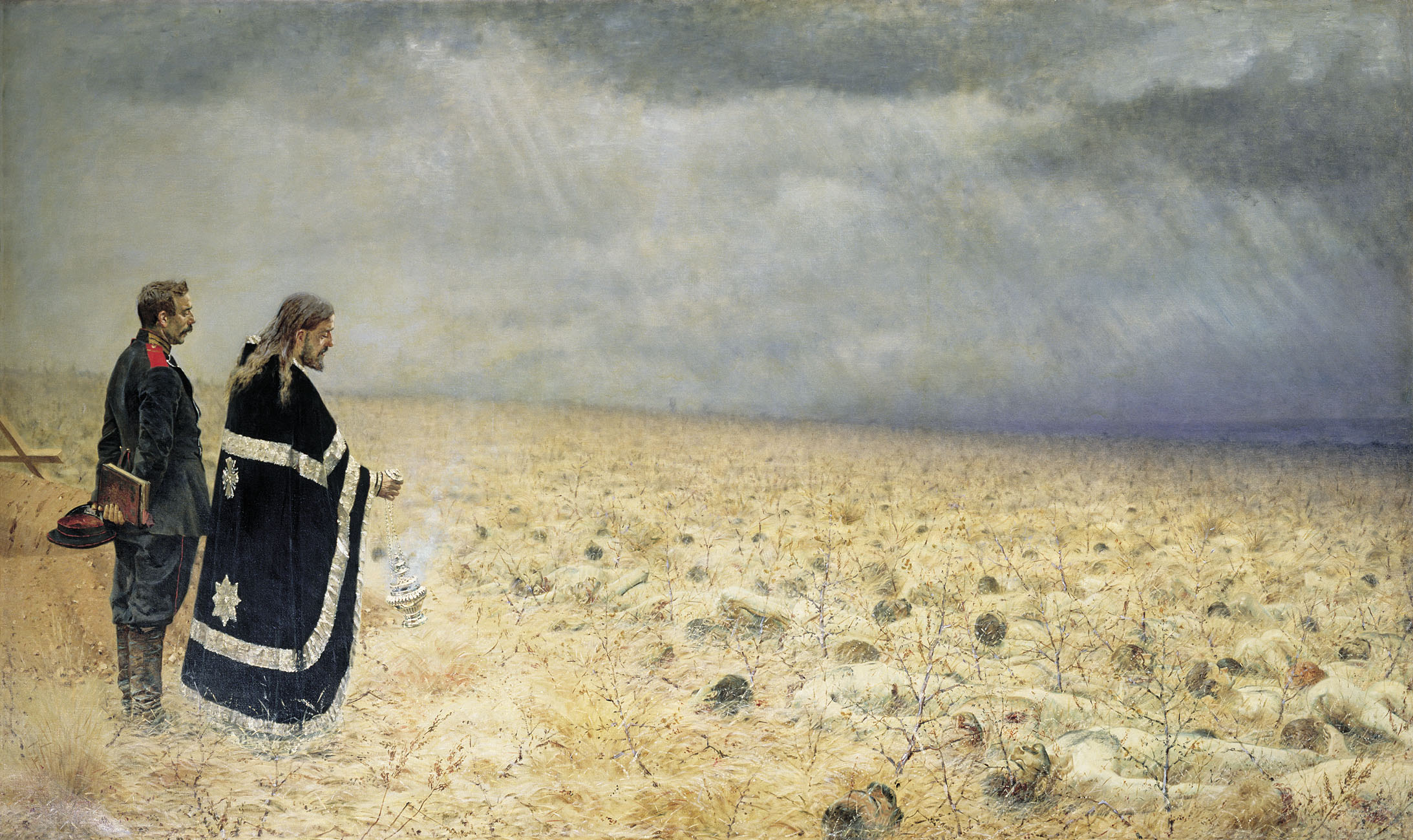 Undoubtedly, there has been a lot, really a lot of famous Russian travellers, musicians, artists, and statesmen among history. Many of them are even recognised worldwide. Here, I would like to show one more. One, that you may have heard of already since he is also quite famous. And that is, the prominent Vasily Vasilyevich Vereshchagin (Russian: Василий Васильевич Верещагин). He earned international fame for many of his deeds in life. These include serving in the Imperial Russian Army, heroic service during the siege of the ancient city of Samarkand, exhibiting in the world expo, portraying the British rule in India, and many more! Interestingly, German field marshal Helmuth von Moltke the Elder and the Austrian minister of war even forbade their soldiers from visiting one of his pictures. Which ones? Why? I will answer these questions in a minute. I will also immerse you in the amazing life of this unique man!

Vereschagin was born on October 26, 1842, in Chervopets (Череповец), Novgorod oblast’. His father was a landowner of noble birth, while his mother was of common origin and had Tatar roots. He was the middle of three brothers. Just when he was eight years old, he already became a cadet in the famous Tsarskoye Selo. He first served in the Alexander Cadet Corps. Three years later, however, he went on to become a seafarer, joining the St Petersburg Sea Cadet School. He made his first trip on the frigate Kamchatka, travelling to Denmark, France and Egypt. Later, this voyage played a big role in his fate, as he became a real globetrotter later in life. This journey, which changed his life forever, took place in 1858 when he was just 16 years old.

Despite the fact that he was the best student in his group, after graduating he still left service immediately in order to learn art and painting. In 1863, he won a medal from the St Petersburg Academy, where his teachers taught him late style classicism. In spite of the success, this award did not satisfy him. He wanted more. In 1863, he destroyed the painting which he considered average and enrolled in the Academie des Beaux-Arts in Paris.

Even though he initially expected a lot from the Paris Academy, he was not satisfied there, either. The reason was that his teachers taught him the same style as he studied in Petersburg. His mentor was Jean-Léon Gérôme. Jean-Léon Gérôme was a painter and sculptor in the style now known as academicism. The range of his oeuvre included historical paintings, Greek mythology, Orientalism, portraits, and other subjects, bringing the Academic painting tradition to an artistic climax. In addition, today he is one of the most important painters from this academic period. In 1866, Vereshchagin exhibited in the Paris Salon. Still, because of his dissatisfaction, he chose the life of a traveller instead. As he put it, he became a traveller of sorts to “study the living annals of our world’s history”.

He accompanied General Konstantin Kaufman on his Turkestan expedition. He showed exceptional heroism during the siege of Samarkand for which he received the Cross of Saint George. There, he experienced the cruelty of war, which had a great effect on his later works. He was keen on not only portraying the bravery in war and the heroism and glory of it but also the losses and the suffering. This angered quite some of his commanders, and sometimes he even had to destroy his paintings. He returned to St Petersburg in late 1868, to Paris in 1869, back to St Petersburg later in the year, and then back to Turkestan via Siberia at the end of 1869. Around this the time, he really started to gain international fame. He established an atelier in Munich in 1871. He also gave a solo exhibition of his works at the Crystal Palace in London in 1873. In 1874, he gave an exhibition in St Petersburg. Unfortunately, in this exhibition, he got into a scandal. Two of his paintings portrayed the Russian military in poor light, and because of that, the organizers denied exhibiting them. The paintings were The Apothesis of War and Left behind. 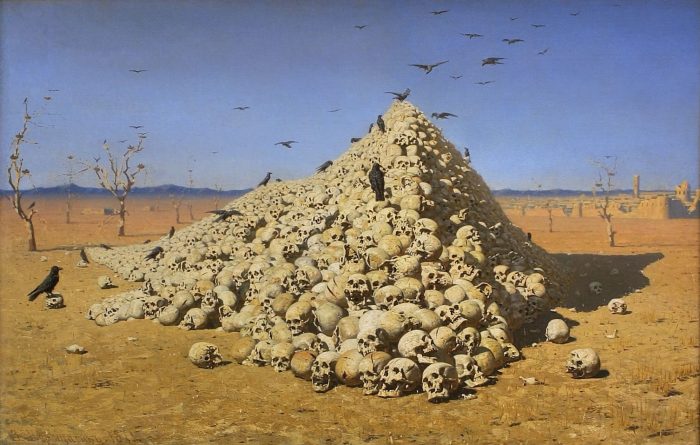 The painting, Apothesis of War, is dedicated “to all conquerors, past, present and to come”. You can see it anytime in the Russky Muzey

Later, he made a long trip to India, the Himalayas and Tibet, but then again, he returned to active duty in the Imperial Russian Army. Having participated in the Russian-Turkish war, he was dangerously wounded. His brother also died in the conflict. Following these events, he finally settled in Munich. He had a new goal. To portray the horrors of war and to promote peace. His works gained more and more popularity. He had exhibitions in London, Berlin, Dresden, Vienna and other cities at this time. His famous paintings of this period include the following: 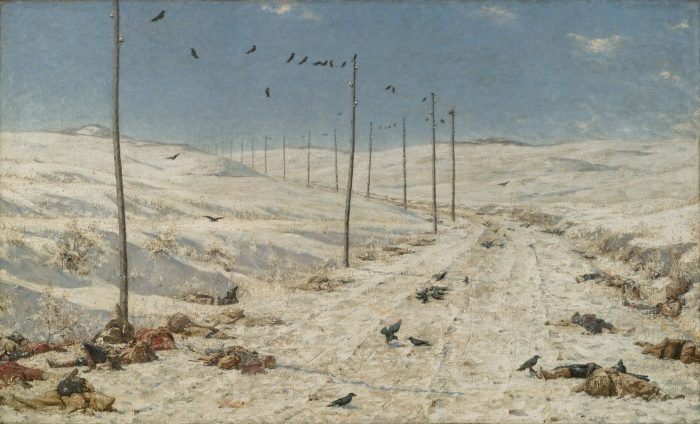 The Road of the War Prisoners, 1879, currently in the Tretyakovskaya 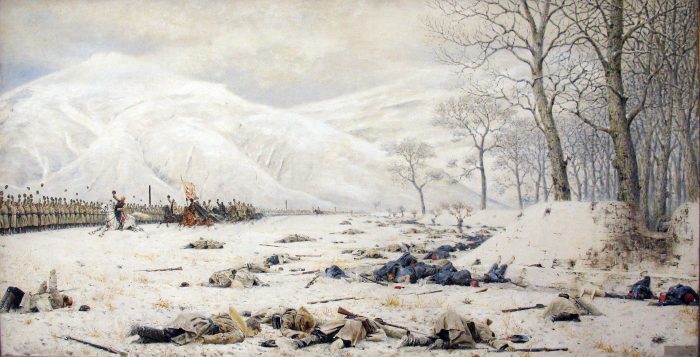 The battlefield at Shipka, 1878, currently in the Tretyakovskaya

After the attack, 1878, Brooklyn Museum

Vereshchagin also painted several scenes of imperial rule in British India, which led to much controversy. In 1882, when Vereschagin had an exhibition in Berlin, Helmuth von Moltke (the Chief of the General Staff of the new, unified Germany) visited the Apotheosis of War. The painting confused him and Moltke forbade German soldiers from visiting it ever again. The Austrian minister of war also did the same. His anti-war books were also banned in the Russian Empire. After a series of journeys to Syria and Palestine, he painted scenes from the New Testament. This yet again led to controversy, as the figure of Jesus had too many Semitic features for that age. Later, in 1893, he moved to Moscow, where he started working on his “Napoleon cycle”, probably based on Tolstoy’s famous novel, War and Peace.

Waiting for the deputy of the Nobles, at the gates of Moscow, 1892, Museum of the Great Patriotic War in Moscow

The end of the Borodino battle, 1900, Museum of the Great Patriotic War in Moscow

In what would prove to be his final tour of the world, the artist visited Manchuria during the Boxer Rebellion, the Philippines, the United States, Cuba, and in 1903, Japan. The following year on April 13, the painter died in the midst of the Russo-Japanese War, onboard the Battleship Petropavlovsk during it’s sinking. He served alongside general Stepan Makarov, for whom he painted his last image. It was recovered almost undamaged. Overall, many people can say a lot of things about him. But by the end of the day, what is sure is that he was a man truly ahead of his time, with his message of peace. A real traveller, and a true explorer, while also being an experienced painter. He truly covers themes which interest almost everyone. I sincerely believe that anyone can find something notable or memorable in his art, so you should give him a chance, too!