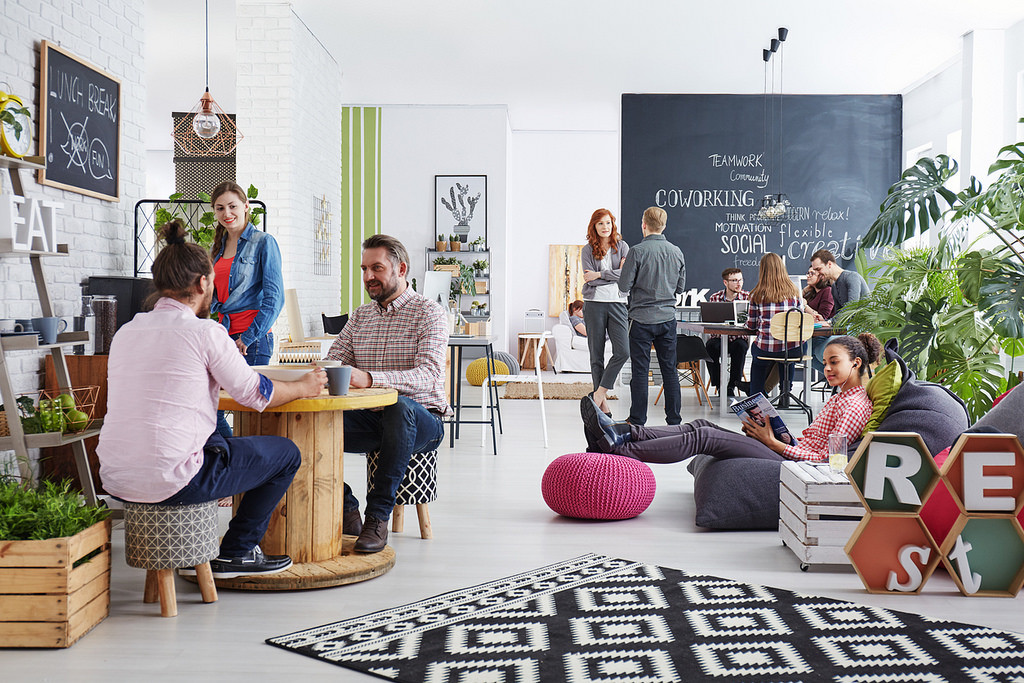 Co-living spaces might be here to stay, even if our society is perceived as highly individualistic. I have always had the feeling that in big cities people tend to be more self-absorbed. We all just do our things and mind our own business. On our daily commute to work or school we often prefer to lean our heads down and look at a screen we fiercely grab in our hands. We have our own phones that we take with us everywhere to distract yourselves. We could maybe have a pleasant conversation with our neighbour, but we rather continue reading the news or watching some stupid video we’ve just found on youtube.

There are certainly some exceptions to this individualistic lifestyle and the spreading of the so-called co-living spaces are proof of that. In this increasingly individualistic world that we are living in, more and more people decide to share a space for living instead of just renting a flat or a room. In this space, they do not only intend to cover their basic necessities but also the social ones.

From Kommunalki to Khrushchovkas: the end of communal living spaces? 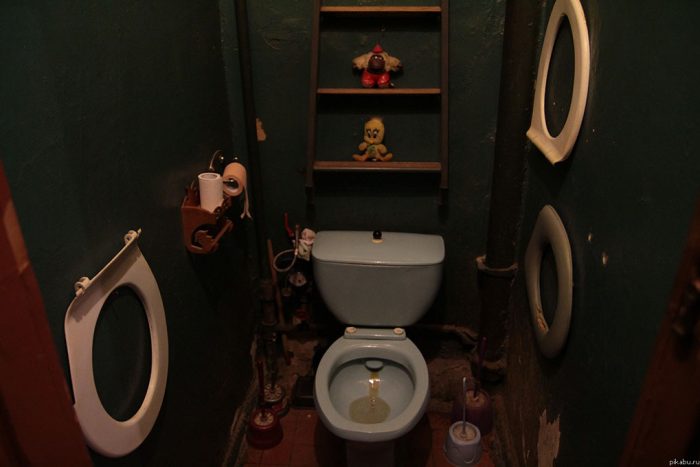 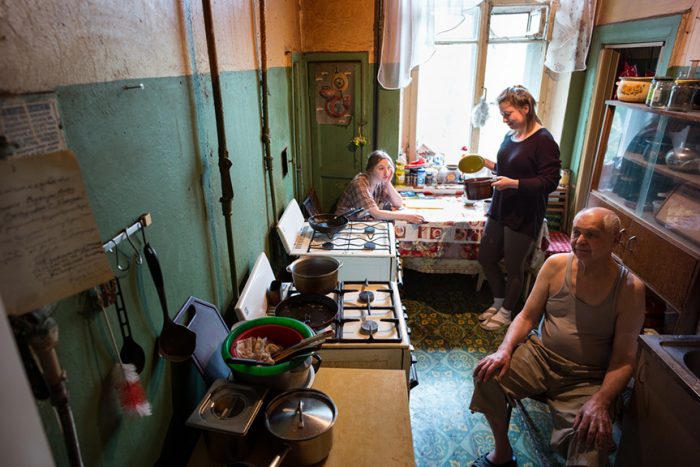 This idea of sharing a common living space is nothing new to the inhabitants of St. Petersburg. During soviet times, many families shared a kitchen, bathroom, and toilet while occupying their own private room. Although it existed already in the Tsarist period, after the revolution the Komunalka was both a solution to the lack of housing in the city and a way of living according to the communist principles. Although they lived their golden age during soviet times, Komunalkas still exist in Russia. There are plenty of articles online on the internet if you want to know more about the topic. You could also watch the documentary “The age of Komunalki”.

During the Khrushchev Thaw, many of this Kommunalka were abandoned and people moved to massively and rapidly constructed grey buildings known as Khrushchyovka (хрущёвка). This did not make all the Kommunalki disappear. Some of them are still functioning as regular kommunalkas and some others been transformed into something a bit different: co-living spaces.

Although, as mentioned before, communal apartments still exist, they now coexist with other co-living spaces who are more than just a central and affordable living space. On the following lines, you can learn more about different co-living spaces where people do not simply sleep under the same roof. 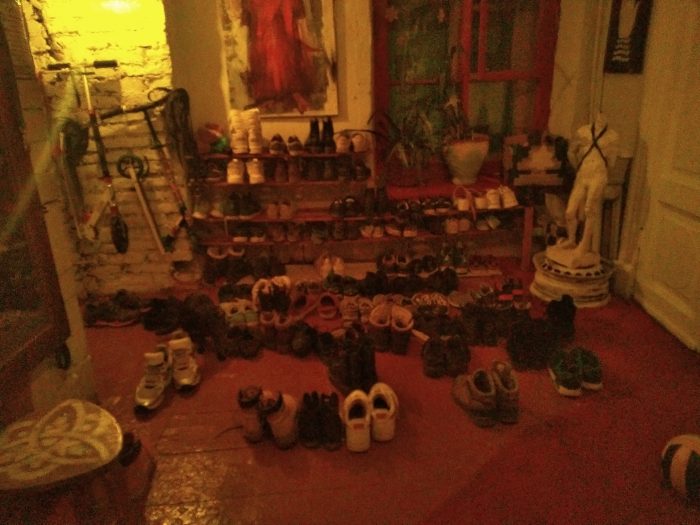 Shoes by the door in Triglinki

This co-living space was created four years ago on one of the artsiest areas of the city, Kolomna. The project started with the idea of created an artistic environment where to live a feel part of a family and it seems like they achieved their goals. This space has a unique artistic atmosphere where you feel welcomed from the very beginning. It is also interesting to mention that Triglinki is a smoke-free, alcohol-free and meat-free space. In this co-living space, you can share a room with other guests, rent your own room for some days or just join one of their many events.

It is not only a place where to live. They organise concerts,  performances, exhibitions, lectures, film screenings, workshops, etc.  I have only been there once for a concert, but the atmosphere was magical. The concert was held in the room some of its residents shared. Some of us were sitting on the floor, some on some stranger’s bed and some others of the chairs provided.

If you like this type of artsy atmosphere you should definitely visit Triglinki. You can follow them on VK to get information about future events.

Kubometer is another of the co-living spaces located in Kolomna. Created six years ago, It’s a six-bedroom apartment where people share both a living space and activities. Unlike how it happened in soviet Kommunalkas where each room might be occupied by a family, in this apartment each person occupies a room. Like Triglinki, Kubometer is also in constant renovation to provide a better environment for its inhabitants and the guests of their many events. These events are commonly announced on their VK page where you can check also videos and pictures of past events such as cooking workshops, English discussion club or presentations on different topics.

Having a good atmosphere at home is considered to be essential by the managers of the place. Therefore, If you ever consider living there you will have to fill in an application and pass a job interview so that they check you’re suitable for the place.

Early Birds Opened in 2016 and, like the two other co-living spaces mentioned before, Early Birds is also a perfect place for artistic and active people. The house has a  space for lectures, workshops and film projections.  The creators of this communal apartment wanted to create not only a place where to sleep but also a family. Inhabitants are encouraged to share and talk on the different common spaces in the apartment and the kitchen is always available for culinary experiments. If you want to know more about this artistic space check their VK page.

Personal space is also valued in this space. Although the two bedrooms are shared, they have created divisions so that you can enjoy some chill moments in private whenever you wish. 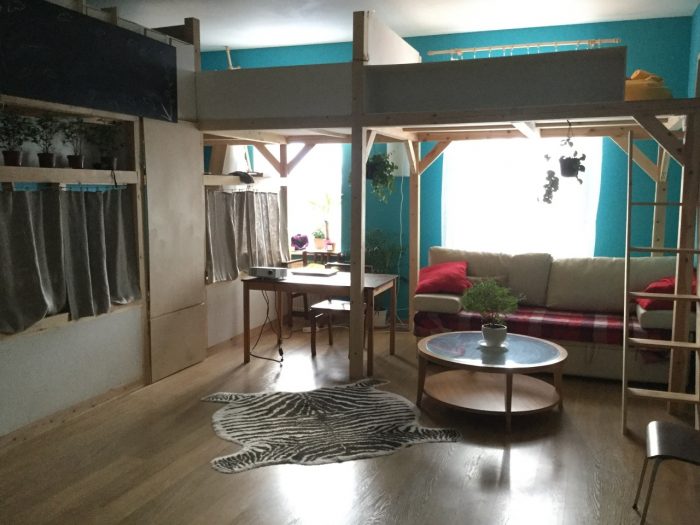 Whether it is by choice (or because you didn’t have any other choice) living in such a big family can have many advantages for the guest to enjoy. And the secret to surviving is to respect each other and to have certain basic rules of cohabiting. Would you be willing to live in such a place?