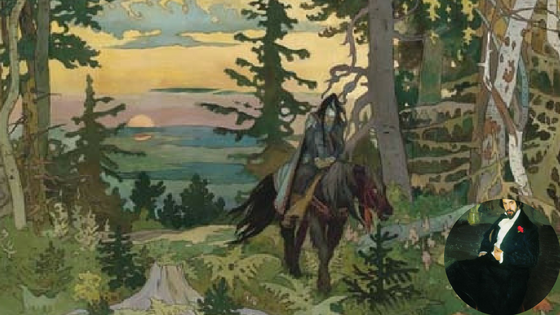 Ivan Bilibin was born on the 16th of August 1876 [O.S 4th August], in Tarkhova, near St Petersburg. Bilibin was a prolific illustrator, set and costume designer. Even if you haven’t heard of his name, I would be surprised if his art didn’t ring a bell. Bilibin was influenced largely by Art Nouveau style. His artwork is most commonly associated with Russian fairy tales. Even today, the chances of you buying a Russian fairy-tale book illustrated by him is high. Such was the influence of his art, it is arguable that Bilibin’s style has come to quintessentially define our perceptions of what Russian folklore art is. 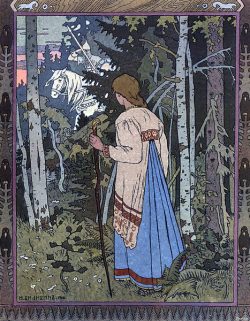 An illustration from Vassilisa the Beautiful

Bilibin first studied in Munich at the Anton Azbe Art School. There, he was influenced by the Art Nouveau movement that was sweeping Europe by storm. When he returned to Russia, he studied under Ilya Repin, the great Realist painter. In 1899, Bilibin gained national renown when he released a series of illustrations for Russian fairy-tales such as The Firebird and the Grey Wolf and The White Duck. The series propelled him into a career of illustrations, set and costume designs. His creative flare was further developed during a trip to Russia’s northern territories between 1902 and 1904. The Russian north is a great expanse of endless birch and pine forests that stretches across the vast northern steppe. For Bilibin, his time spent in the north must have harked back to an old, forgotten Russia; where a way of life, traditions and old stories remained largely unchanged.

At the turn of the century, there was an intense feeling of historical nostalgia among the intellectual classes in Russia. Before the revolution, a highly politicised movement of ‘Russification’ swept across the Empire. Buildings, such as the famous Church on Spilled Blood were designed in homage to old architectural and artistic styles of old Russia. This romanticised period of creative design may have influenced Bilibin. Bilibin found himself between two schools of art; one that symbolised tradition, and one that emphasised artistic experimentation. His drawings and set designs certainly evoke this feeling of historical nostalgia. For the most part, his drawings depict scenes from famous Russian fairy tales. Many these are set in the dense birch-tree forests of Northern Russia. He depicted his characters in elegant, traditional Russian costumes. At the same time, however, the Art Nouveau style heavily influences his illustration. Vibrant, but at the same time muted, his illustrations are made of basic, solid colours. The drawings are simple, but elegant, sometimes bursting with visual liveliness; the attention to the small details is clear. They are characterised by soft, curved shapes and lines typical of Art Nouveau style. 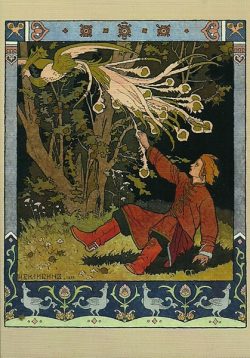 Bilibin designed the sets for many ballet and opera performances. One notable mention is the premiere production of Nikolai Rimsky-Korsakov’s opera The Golden Cockrell in 1909. After the Revolution in 1917, Bilibin fled abroad, first to Egypt, and then to Paris. Like many emigres, he longed for homeland, but it was not until 1936 before he returned. Settling in St Petersburg, by then renamed Leningrad, Bilibin lectured at the Russian Academy of Arts, until 1941. He died in 1942 of starvation during the Siege of Leningrad, having refused to leave the city. He was buried in a collective grave.

Bilibin’s drawings are still popular to this day. Because his illustrations depict traditional Russian folklore stories with a more experimental artistic form that is perhaps more familiar to us now, his legacy is one that continues to influence our perceptions of traditional Russian culture. The prevalence of his drawings among foreigners and Russians alike seventy-six years after his death is testament to his talent.

A passionate Russian and history student, I'm here in bonny St P. to build on my knowledge of Russian and learn more about the shared history between Scotland and Russia.