Home » Blog » Mysticism and Murder: The legendary story of Rasputin and St. Petersburg

Mysticism and Murder: The legendary story of Rasputin and St. Petersburg 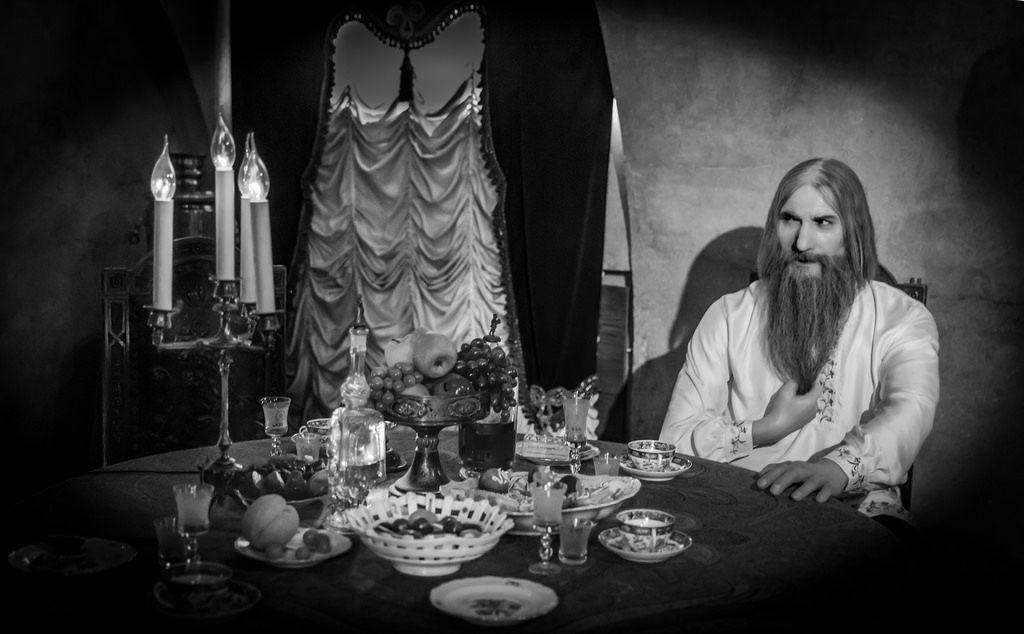 Mysticism and Murder: The legendary story of Rasputin and St. Petersburg

Mystery, Murder and Mysticism. These aren’t words that you would normally associate with the magical city of St. Petersburg. Nonetheless, the murder of Russian mystic Grigoriy Rasputin in the winter of 1916 was one of the most controversial and infamous events to have happened in the-then capital. Now, the Yusupov Palace, the venue for the murder, is amongst the most frequently visited landmarks in the city.

Recently, I visited the Yusupov Palace, and the atmosphere there surprised me. In some ways, I always thought that such a place would have a very mysterious vibe- I was half-expecting Rasputin’s ghost to come out and haunt me (thankfully he didn’t).

What my visit to the palace did teach me, however, was that Rasputin’s life makes him one of the most fascinating and iconic figures in Russian history. 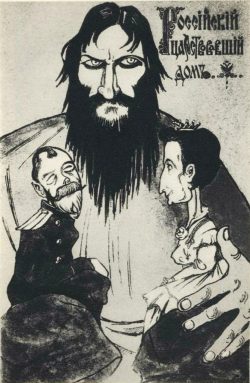 Born in a small village in Siberia in 1869, Grigoriy Rasputin was the son to peasant parents and grew up in poverty. Although little is truly known about his upbringing and childhood, fabricated stories surrounding the early developments of his “mystical powers” began to arise thanks to his growing fame.

After seeing a vision of the Holy Virgin Mary, Rasputin decided to leave the village and begin a life of pilgrimage and religion. He spent many years travelling around monasteries and holy sites around Russia, even drifting out as far as Greece to explore Orthodoxy even more.

Gradually, Rasputin began to work his way to prominence within the Orthodox Church, and by way of good fortune, he was finally met Tsar Nicholas II in 1905. After meeting the royal family, they became convinced that Rasputin possessed the power to heal their son, Tsarevich Alexei, of haemophilia.

Rasputin was invited to St. Petersburg in order to keep an eye on the Tsarevich. Rumours persisted that the mystic was capable of faith healing and he became increasingly famous. Tsarina Alexandra believed that Rasputin had miraculous powers that could fully heal Alexei. As a result, alternative religions and curiosity surrounding the supernatural increased within St. Petersburg’s high society since Rasputin’s arrival to the capital in 1903.

Rasputin gained even more influence within the family when Tsar Nicholas II decided to leave St. Petersburg to lead the Russian troops in World War I, leaving Tsarina Alexandra to rule the country in his absence. Rumours persisted about the relationship between Rasputin and Alexandra. He became her most trusted confidante and advisor to the Royal Family. Due to his influence on the Tsarina, the other members of St. Petersburg’s elite severely distrusted him, including Prince Felix Yusupov, the husband to Tsar Nicholas’ niece.

Rasputin with the Royal Family

Yusupov claims that he invited Rasputin to his home in the Yusupov Palace, and offered him cakes and wine laced with cyanide. The poison did not seem to affect him. Several hours passed and Yusupov began to panic. He then shot Rasputin in the chest. Later on, when checking to see if he was really dead, Rasputin leapt up and, after a struggle with Yusupov, he escaped from the palace. From there, he was shot three more times in the palace gardens, after which he was wrapped in a carpet and thrown into the Malaya Nevka River.

A few weeks later, Rasputin was found downstream from where he was thrown. Rumours have it, that water was found in his lungs, which meant that despite being poisoned and shot four times, he had, in fact, drowned to death. 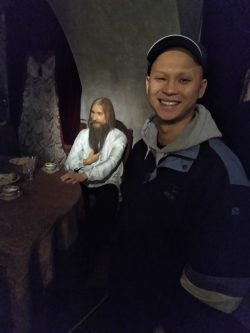 Me and Grigoriy himself at the Yusupov Palace

Gregory Rasputin’s life was shrouded by mystery and controversy was never far away. He was legendary for the effect that he had on women, as well as his ability to subvert reality and influence the supernatural.

Due to his reputation, Rasputin has become the subject in various fields of entertainment, notably as the antagonist in the musical “Anastasia” and the famous Euro-pop song “Rasputin”. He will even be played by Leonardo DiCaprio in an upcoming biopic of Rasputin’s life.

Today, at the Yusupov Palace, you can view the Rasputin exhibit, where the main characters of the infamous murder scene are recreated in wax in the real cellar where Rasputin was murdered. One of the most powerful images that affected me during my visit, was that I was convinced that waxwork Rasputin’s eyes followed me as I walked around the cellar!

The Yusupov Palace is also a museum in itself, where one can see how St. Petersburg’s elite families lived. The Prince’s former private concert hall is now used for ballets and plays, as well as being a point of interest for art enthusiasts. 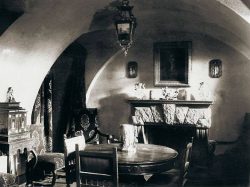 However, the atmosphere created by one of the most poignant and controversial figures of Russian history is ever present, enhancing St. Petersburg’s reputation for mystery, magic and the supernatural.

If you’d like to find out more about the weird and wonderful sides to St. Petersburg, click here!