The Russian Railrod: an untold story 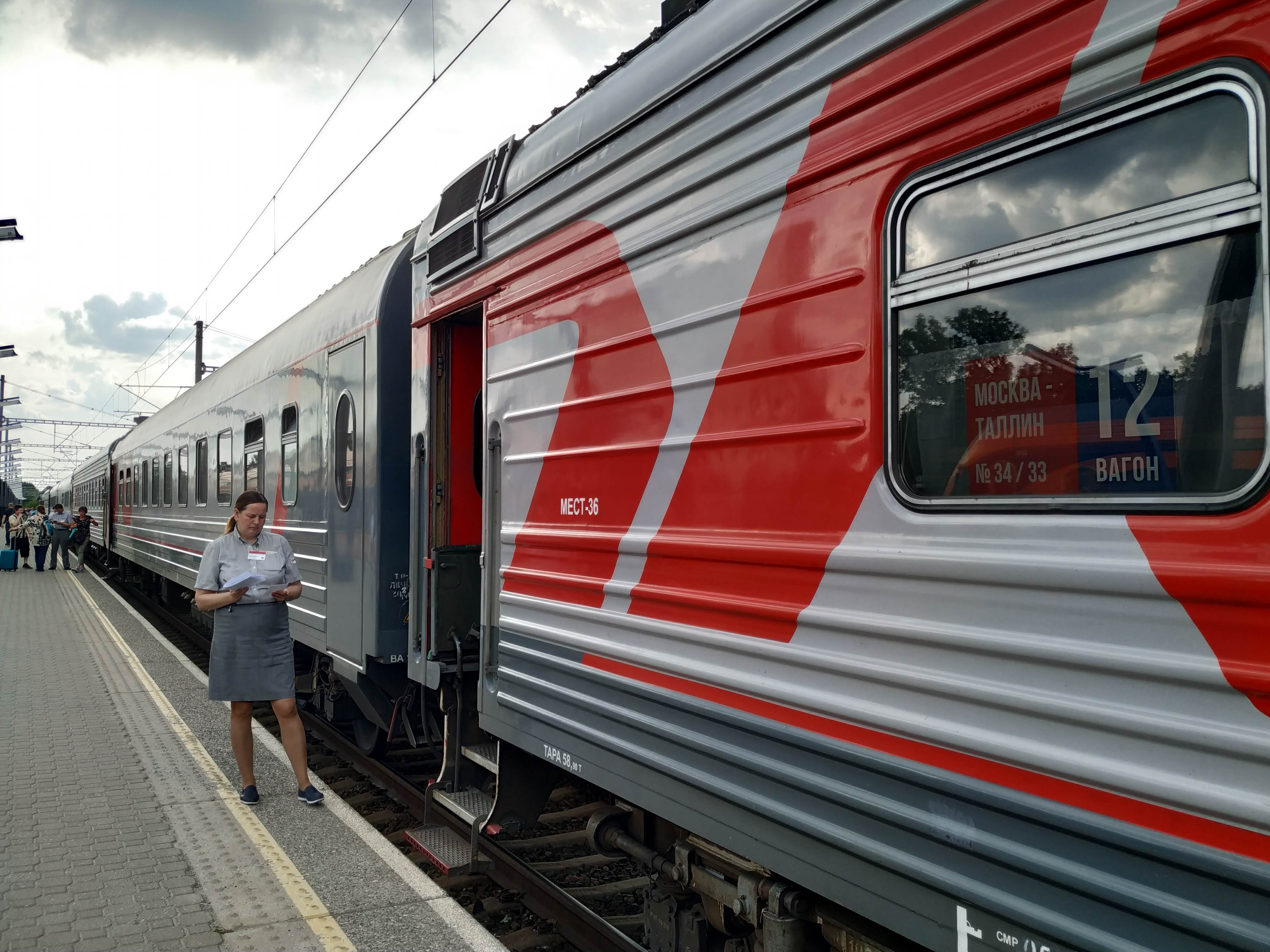 With a country as big as Russia, it’s only natural that you have to connect it somehow. Well, at least if you want to avoid having to travel three months on horsebacks to get from one end to another. So, what can you do? Before aeroplanes became a thing, you only had a few options. Either regular post offices, where you can constantly change horses, and building roads. Many of them. Of course, boats and extent canal networks are also a possibility. Just not in Russia. What else is there? You could maybe use the newest technology there is. The railroad! That was also the opinion of Tsar Nicholas I. Interesting fact, that he didn’t receive the proper education of a Tsar. He was trained to be a soldier and a military engineer. Thus, his knowledge about engineering made the advantage of the railroad obvious for him.

Later, this railroad helped form the Russian nation. Economically, militarily, culturally and sometimes even diplomatically! Due to its unique character, it sure is one of a kind. Do you wanna know how? Keep reading!

In the beginning, there was nothing. Only two serves, Yefim Alekseyevich Cherepanov (1774–1842), and his son Miron Yefimovich Cherepanov. In spite of his low rank in society, Yefim worked as the chief mechanic for all the factories in the town of Nizhny Tagil. This was beneficial, because his masters, the Demidovs were a family of famous factory owners. The Cherepanovs often experimented with machinery, and through their expertise, they invented the first Russian steam engines. They created more than twenty steam engines, and in 1834, they invented the first Russian steam locomotive.

Monument to the Cherepanovs in Nizhny Tagil

Although their invention proved to be very useful, the railroad progressed slow. The first actual railroad line ran between Tsarskoye Selo and Pavlovsk, Saint Petersburg from 1837. It was 17 km long, designed by the German engineer Franz Anton von Gerstner. Still, people didn’t consider it anything more than a fancy toy. And no one can really blame them for it. That line really had no role in the economic, political or cultural life of Russia. Still, a new idea appeared. To construct the Moscow-St. Petersburg railroad.

On 1 February 1842, Tsar Nicholas I ordered the railway’s construction. This became the project of prince Pavel Melnikov, who even travelled to the United States to study the technology needed to execute the grandiose project well. He and his company met George Washington Whistler, who designed the Canton Viaduct for the Boston and Providence Railroad and invited him to participate in the task. He agreed. So the project could finally begin. It was completed in 1851, but unfortunately, Whistler did not live to see this, as he died in 1849. The first train left Saint Petersburg at 11:15 and arrived in Moscow at 21:00 the next day. Counting, the first ‘real’ Russian train trip took 34 hours! Track gauge was 1,524 mm (5 ft) and this became the Imperial Russian standard gauge. Interestingly, much later, this helped the Soviet Union to win the Second World War, because the Germans used a different gauge width. This halted their progress through the Union and gave the Red Army a chance to reorganize the troops. 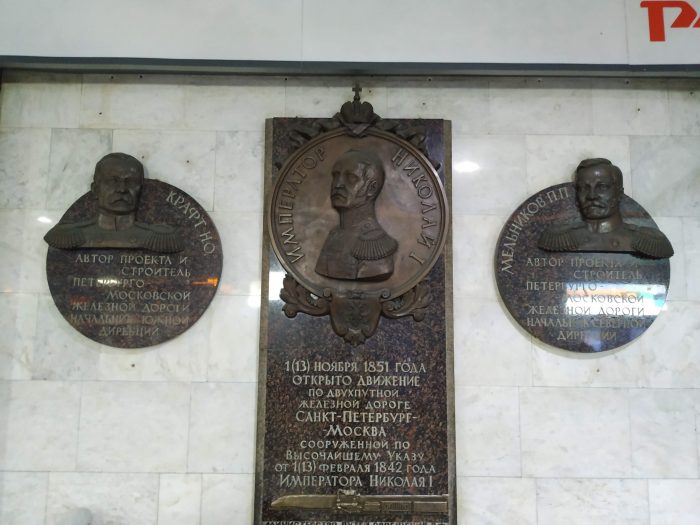 A monument to the people, creating the first long-distance Russian railroad, at the Leningradsky Vokzal in Moscow 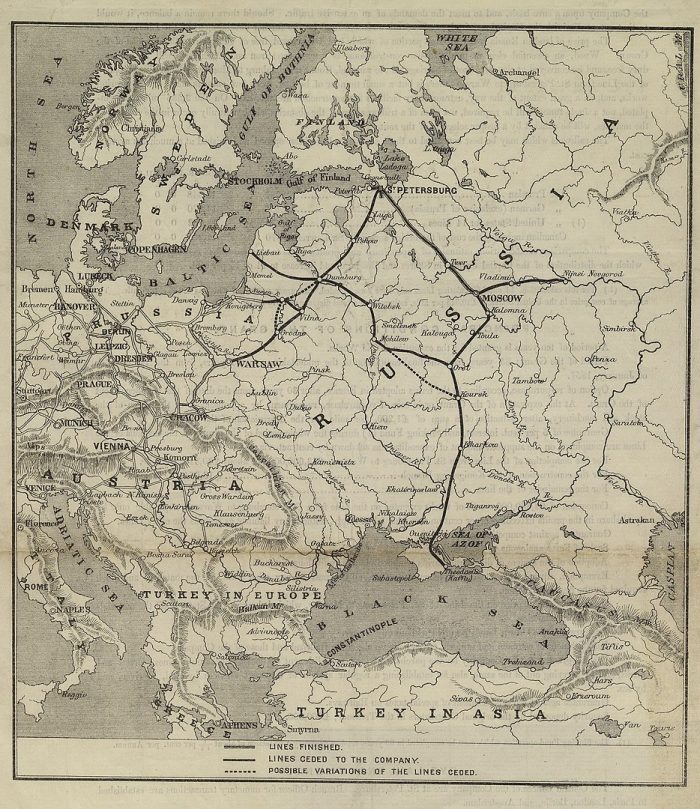 On 15 June 1865, an edict of Alexander II established the Ministry of Communications, which absorbed the Department of Railways. In the 1860s and 1870s, Pavel Melnikov, Russia’s first Minister of Communications, played a key role in the expansion of the railway network throughout European Russia. In the 1880s and 1890s, the Trans-Caspian railway connected the Russian Empire’s Central Asian provinces with the mainland. By 1906, Central Asia was directly connected by the Trans-Aral Railway. However, the most significant one was still the one constructed between 1891 and 1916, the Trans-Siberian Railway. The Trans-Siberian Railway even helped the progress of colonisation of Eastern Siberia, because now grain and food became easily available everywhere.

Later, the Trans-Siberian Railway even became the most important line during the First World War, because it connected Russia with her Entente allies. During this time, another line was also constructed, connecting Murmansk with the rest of Russia, for easy White Sea access. Tsar Nicholas II also clearly attached great importance to railways since he had his own railway line constructed from Vitebsky railway station to the Emperor railway station in Pushkin town in 1902. It ran parallel to the mainline of the Tsarskoye Selo Railway and then branched south-west at the village of Kouzmino. It was for members of the imperial family and representatives of foreign powers.

Later, the railroad yet again played an important role in the Soviet Times, too. Trotsky used one armoured car as his personal headquarters. Since the railroad workers were mostly part of the Bolshevik Party, the revolutionaries controlled the railroad in the country immediately. The Soviet Union expanded the railway network to a total length of 106,100 km by 1940. These tracks were used to transport entire factories to the East, to save them from the Germans. Soldiers also travelled to the front on trains. After the war, the government decided to expand the railroad to more than 145,000 km of track.

After the collapse of the Soviet Union, the Russian Railroad face the problem of fragmentation. Many parts of the tracks were now abroad. From this depression, the railroad still hasn’t fully recovered. But even today, the Trans-Siberian line remains the most important transport link within Russia; around 30% of Russian exports travel on the line. It also attracts foreign passengers and travellers, but still, mostly Russians use it. The Moscow-St. Petersburg line was also modernised. The maximum speed is 250 km/h (155 mph), the fastest train taking 3 hours and 30 minutes. The Siemens Velaro RUS (the Sapsan), has operated on this line since 2009, running below their maximum speed of (300 km/h (186 mph)) because of difficulties upgrading all the track. Russian Railways spent nearly $1 billion on eight trains. In 2019, the Railroad company placed a third order of €1.1 billion for 13 more trains of the same model. 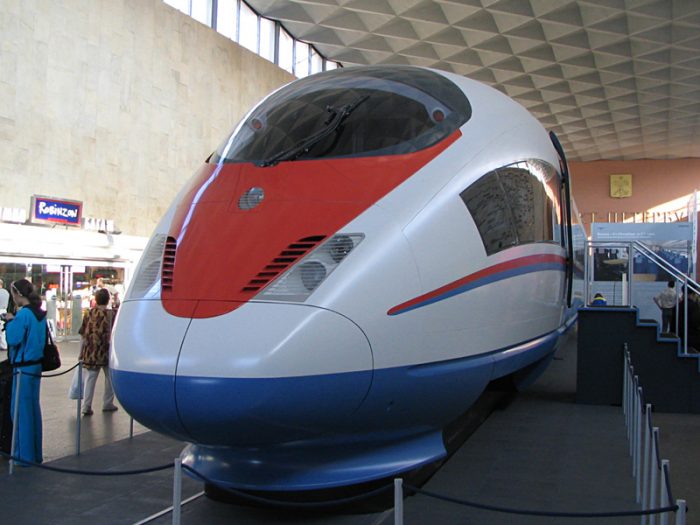 With Sapsan, you can cover the entire 700 kilometres in just 3 hours!

What do you think, what kind of challenges are ahead of Russian railroad today? Have you ever thought about travelling to Vladivostok on a train? Or do you have any experience with Russian trains? If any of this is true, bu sure to tell us in the comments!