Home » Blog » Traffic in Moscow: Is the Nightmare Improving?

Traffic in Moscow: Is the Nightmare Improving? 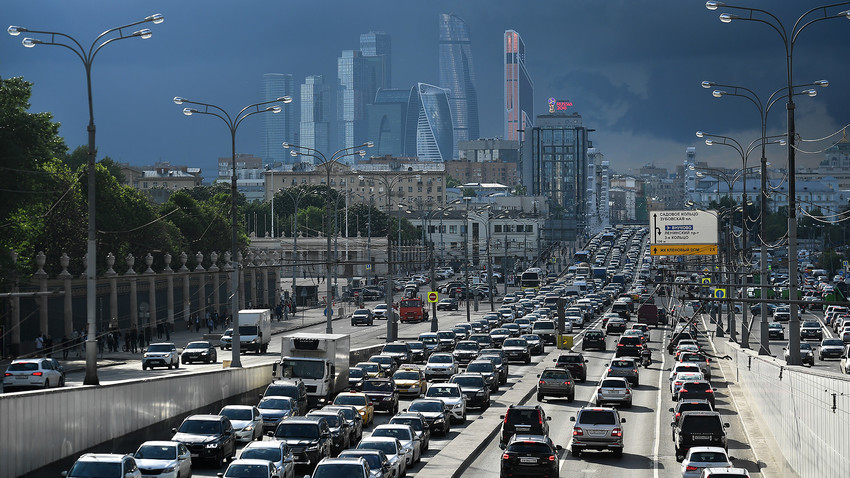 Traffic jams (probki – пробки) have been the problem that refuses to go away for the city of Moscow, the largest city in Europe. For many years it was ranked as the most congested city in the world. In 2010 the situation became close to critical, with some waiting times reaching almost five hours during the rush hour period (час пик) as the road network reached its maximum capacity.  Since then the city council has changed tack in an effort to deal with the issue. Here is an overview of how Moscow is trying to solve its traffic problem.

Why is the situation in Moscow different to any other major city in the world? The answer to this lies in the period directly after the breakup of the Soviet Union. During the time of the USSR only a very select group of people could afford to own a car, and as such it was regarded as a major symbol of social status and sign of success in life. When the USSR collapsed, suddenly cars became much more affordable and people bought cars en masse, causing an explosion in car ownership.

However the root of the problem is not so much this, as how the city council tried to adapt to such an increase in car ownership. From 1992 to 2010 the city’s plan to cope with more cars was simply to build more roads. But of course the rate of construction couldn’t keep up with the increasing number of cars.  This prioritisation of funds for new roads instead of development of public transport routes is one the main reasons why Moscow is in the situation it is today.

From 2010 onwards the main aim has to been to get people walking and using public transport, instead of using their cars. However with the pavements having been narrowed in favour of greater road space, and much of the centre engulfed in smog, this was to be a difficult task. In short, the road network itself needed redevelopment whilst at the same time increasing the capacity of public transport.The first step involved changing the pavements from asphalt to granite, making them much wider and raising them further above the road, overall making them much more pleasant to walk on. On top of this the planting of many new trees, including the creation of 160 new parks, has made Moscow into one of the greenest major cities in the world, with 40% of its territory now covered by green space. This has overall made Moscow a much nicer city to walk through. 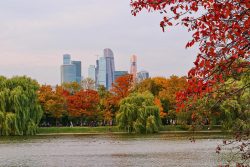 The implementation of an Intelligent Transport System has also lead to an easing of congestion (затор). 2,000 surveillance cameras, 3,700 road detectors and 6,000 traffic lights are taking over the roles of emergency responders and law enforcement in solving issues when they arise, such as redirecting traffic around an accident or roadworks. In addition to this, a number of new paid parking areas have been introduced, and combined with an expansion in pedestrian areas has reduced the number of cars in the very centre of the city. This was such a success that Moscow won the 2017  TomTom award for parking planning, ranked number one globally.

The metro is one of the USSR’s few contributions to the current drive in developing public transport. Opened in 1935, it was one of the USSR’s most ambitious architectural projects. Not only is it one of the deepest transport systems in the world, its reflective marble walls, high ceilings and grand chandeliers are more akin to the inside of a palace than a metro station. As a result of recent expansion the Moscow metro system is now the 6th largest in the world in terms of system length, and there are still 150km of lines scheduled to be built between now and 2022. Above ground, a network of highly efficient trams now run in addition to the bus service, of which by 2021 diesel versions will no longer be bought, turning the entire fleet electronic. 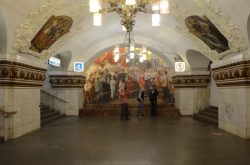 What have been the results

The major development to the public transport system has resulted in a report from the consulting film McKinsey and Company, which assessed public and private transportation in 24 major global cities, ranking Moscow as the most efficient city. More and more people are now using public transport, rising to 2.8 billion in 2017 compared to just 1.9 billion in 2010, which looks to be very positive in light of  the number of registered private cars only increasing by just over a million in the same period.

But despite all this development, in February 2018 Moscow was still ranked as the second-worst city in the world for traffic jams by a report from the transportation analytics company INRIX. Admittedly progress can be seen in the fact Moscow used to rank at number one, but that only came to an end in 2016. Along with the sheer size of the city and its population, the problem is also partly a cultural one. Owning a car is still regarded as a sign of social status and success. As a result many Muscovites are unwilling to give them up, no matter how efficient their public transport system might be, and by the looks of things Moscow’s troubles are showing no sign of dying down any time soon! 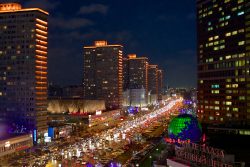 Ever been in a Moscow пробка (traffic jam)? Have you experienced traffic in Moscow? Let us know about your experience in the comments below!