Are Russians Friendly? Answers to Common Questions About Russians 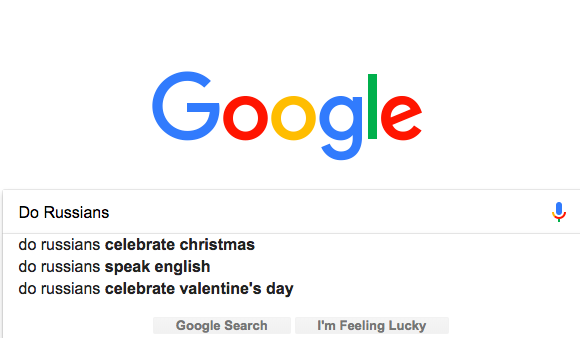 In our last post in the “You Asked, We Answered” series, we looked at Google’s most frequently asked questions about the Russian language. Today, we’re turning our attention to Russians themselves.

People have a lot of questions about Russians, it seems. Some are based on reality, others on stereotypes. Here, we sort the truth from the fiction and answer some of Google’s most common queries about Russians.

No, Russians speak Russian. While English is a popular choice for Russians learning a second language, only about 30% of the country speak it to some degree – and only 3% fluently. English language skills are more common among the younger generation and in major cities such as Moscow and St. Petersburg.

Russians have a reputation for being unfriendly – but is it deserved? Like many stereotypes, this one is borne out of a misunderstanding of cultural differences. In Russia, it is not the norm to smile at strangers or make extensive small talk or chitchat. Also, a lot of foreigners can find the Russian speaking style a little too direct or blunt at first. While these traits can come across as unfriendly to those not familiar with the culture, in fact a lot of Russians pride themselves on their friendliness, helpfulness and hospitality – it’s just the norm to be behave in a more reserved manner when you’re in public or with people you don’t know well.

A lot of different religions are practiced in Russia. While 71% of the country identify as Russian Orthodox, you will also find Russians who follow other branches of Christianity, Islam, Judaism, Buddhism, and indigenous faiths such as Siberian Shamanism. Although religion was suppressed in Soviet times, religious observance has been increasing steadily since the 1990s. That said, there are plenty of non-religious Russians, and even among those who do belong to a particular faith, the majority do not pray or attend services regularly. When asked how religious they consider their country, only 8% of Russians said “very religious”, with 47% describing their country as “somewhat religious”. So are Russians religious? Some are, but by no means all.

Yes, Christmas is a national holiday in Russia. Russian Orthodox Christians, who make up the religious majority in Russia, celebrate Christmas on the 7th January (as with Easter, the date is calculated using the Julian rather than Gregorian calendar). The weeks leading up to Christmas are a time for fasting and reflection, while Christmas Eve and Christmas Day are for church services, feasts and time with the family. Christmas also marks the beginning of a 10-day holiday known as “Svyatki” or Christmastide, which has Pagan roots – fortune telling is still a popular activity during this time.

Yes, although it’s a relatively new holiday that only started to become popular following the collapse of the USSR in the 1990s. As the holiday was imported into Russia, so were many of the Valentine’s traditions – which means you’ll see the same hearts, gift giving, flowers and chocolates in Russia as you’d see anywhere in the West. (The only exception is in Belgorod, whose miserly governor banned Valentine’s day a few years ago for the “spiritual safety” of the region!)

Why do Russians love Adidas?

Russians don’t all love Adidas – but their relationship with the German brand has an interesting history. It all began in the 1980 Moscow Olympics, when the official Soviet team wore Adidas sportswear. While the Soviet state wouldn’t allow Adidas to brand its tracksuits, Russians immediately recognised those trademark stripes and Adidas soon became a must-have brand. Now, Adidas is mostly synonymous with the mafia, street gangster (gopnik) subculture, and the lower classes – although it’s still a comfy choice on long-distance train journeys.

Why do Russians drink vodka?

Russians have been drinking vodka since the 14th century, when a monk accidentally distilled it while attempting to produce “bread wine”. There are several reasons why vodka has become – and remained –  the country’s drink of choice. It’s cheap, it’s easy to make, and historically it was produced and promoted by the state to generate profit. It also keeps you warm during those long winter months and goes well with Russian cuisine.

Why do Russians drink so much?

Admittedly, Russia does have some of the highest rates of alcohol consumption in the world (although these have been falling in recent years). One reason why rates are so high is that Russians tend to drink a high volume of spirits such as vodka compared to other alcoholic beverages, and also tend to drink relatively large amounts of alcohol in one sitting. However, it’s important to note that Russians rarely drink on an empty stomach and will instead typically enjoy several shots of vodka alongside a meal or bar snacks, which helps them handle their alcohol better.

What do Russians say when they toast?

It’s true that Russians love to toast before they drink. It’s not true that Russians say “Na zdorovye” (на здоровье) when they toast – that’s just a misconception among foreigners. There’s not really any one word or phrase that Russians say that translates to “Cheers!”, but rather a range of popular toasts suited to different events and occasions. Common examples of toasts you’re likely to hear in Russia include:

So there you have it: answers to some of Google’s most common questions about Russians. We hope you’ve found it helpful, and that we’ve helped dismantle any misconceptions you might have had. If you’re interested in learning more about the Russian culture and language, check out the rest of our blog. And don’t forget to follow us on Facebook to keep up to date with our most recent posts.