Home » Blog » The Leftovers of Soviet Culture – What Still Remains?

The Leftovers of Soviet Culture – What Still Remains?

Russia has changed a lot since the days of the Soviet Union; gone is Socialist realism, industrialisation and Soviet spies (well most of them anyway). Yet the Russian Federation is still a very young country and many cultural elements have remained from the past. If you look for it, it’s easy to find reminders of the Soviet culture everywhere – and rightfully so, as it is one of the most interesting periods in world history.

In the majority of towns and cities you’re likely find to a ‘Площадь Ленина’ or ‘Lenin Square’. The name is of course a relic from Soviet times and is usually where the main administrative building is located. In each of these squares there is a monument to Lenin, one of the most interesting being in Ulan-Ude, as it is the biggest Lenin head in the world.

Many streets and boulevards also bear the same name they were given after the revolution. Karl Marx Street, Revolutionary Prospect and Plekhanov Street, to name but a few. You’re also likely to find similarly named streets in every city you go to. ‘Ирония судьбы’ (the Irony of Fate’ plays with this theme; where a drunken man accidentally gets on a plane from Moscow to Leningrad and finds a seemingly identical apartment at the same address in a different city! 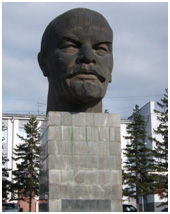 A place to live?

We can also see the Soviet Union remembered in some of the architecture. Often on the façade of an important building you can still see the hammer and sickle. You can also often tell the quality of an apartment based on when it was built. Staliniki, homes built in the Stalin-period, often house long corridors and high ceilings. Whereas Krushcheviki are very small in size and often of poor quality. In the Khruschev period there was a population swell as many of the Gulag camps were closed and ‘political prisoners’ freed. Accordingly, there was as a huge demand for housing. They sought to build as many homes as quickly and cheaply as possible and the result was a series of pretty ugly tower blocks… although better than a homelessness epidemic!

My name is the Olympics

Another relic from the past are Soviet names. Vladlena, for example was a popular female name. It is formed by combining the first-name and surname of Vladimir Lenin. The same goes for the male name Vilen, only this time originating from Vladimir Illyich Lenin. Other good examples include Gertruda, which means ‘героиня труда’ or ‘heroine of labour’, Индустрия ‘Industry’ and Олимпия ‘Olympics’.

Many festivals have also remained from the past. The 1st of May marks the festival of spring and labour – there is also a soviet name dedicated to it – Даздраперма, from Да здравствует первое мая (Glory to the First of May). On the 9th May the famous victory day parade takes place. It’s dedicated to the end of the second world war and is a spectacle honouring veterans of war.